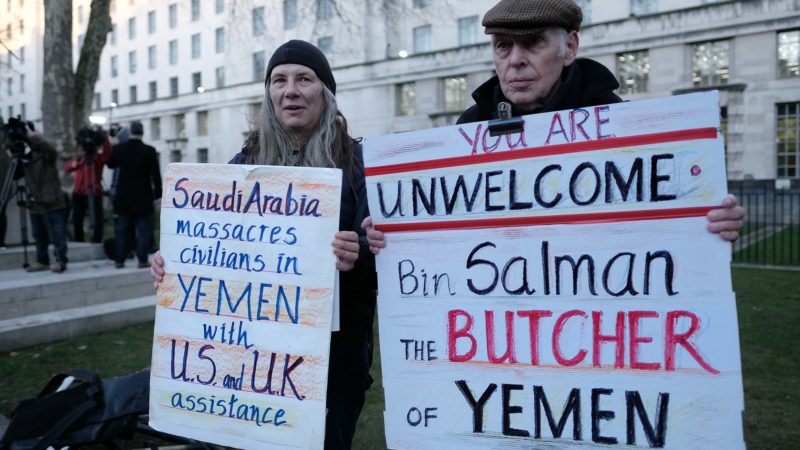 This March, the UK government rolled out its reddest carpet and played host to one of its closest and most disgraceful international allies.

Downing Street, Buckingham Palace and Clarence House were all used as prestigious backdrops for photo-opportunities as the Crown Prince of Saudi Arabia, Mohammed bin Salman (MBS), rolled into London.

The visit was marked by controversy and protests, but it also gave the Crown Prince the kind of statesmanlike images and international approval that he wanted.

A garish advertising campaign saw his face beamed across as the country. Meanwhile Government ministers lined up to tell us how liberal MBS supposedly is, and about the great reforms he was apparently overseeing.

One word which was missing from the lips of May and her colleagues was Yemen. At the same time as MBS was touring the corridors of power, and rubbing shoulders with royalty, the people of Yemen were being bombed and starved in a terrible war that his military was inflicting.

The bombing has caused death and destruction on a terrible scale, yet the Saudi regime has been able to count on the uncritical political and military support of Theresa May and her colleagues.

UK fighter jets have flown over Yemen right from the start, with UK made bombs and missiles being fired from the sky.

Thousands of people have been killed as a direct result of the bombardment, with bombs destroying schools, hospitals and vital civilian infrastructure. The longer the war has endured the worse the situation has become. 2018 has seen Yemen suffering the worst humanitarian crisis in the world.

Horrifying analysis from Save the Children found that 85,000 children under five have starved to death since the Saudi-led bombardment began three and a half years ago.

This is not an accident. It has been a deliberate outcome of the bombing campaign, with the United Nations accusing Saudi-led forces of targeting targeted Yemen’s food production and distribution.

This policy of using starvation as a weapon of war has been exacerbated by a brutal Saudi-imposed blockade that has stopped life-saving food, medicine and supplies from reaching people in need.

Over 70% of all imports to Yemen come through the port of Hodeidah, this includes aid. However, the Saudi-imposed blockade and violence has seen imports reduced by 50%.

Despite the devastation caused by the war, it is clear where Theresa May and her colleagues’ priorities have been. When MBS left London both he and his hosts celebrated the announcement that they were now one step closer to agreeing a major fighter jet deal. The deal, which would be worth billions of pounds for arms companies, has received top-level support from UK Ministers and civil servants.

Seven months after his London visit the Crown Prince was back in the spotlight. This time he was being accused of ordering the cold-blooded murder of a critic. The killing of dissident Jamal Khashoggi in the Saudi Consulate in Istanbul has put UK relations with the Saudi regime under an unprecedented scrutiny.

One outcome of the murder has been to create the international pressure and momentum which has led to a ceasefire in Hodeidah. It is a fragile situation, but, despite some violent skirmishes, it appears to be holding.

It has come at a particularly desperate time. November 2018 was the deadliest month of the conflict to date. The progress in Hodeidah could represent a big step forward, but it should never have taken the death of a journalist for international leaders to push for a political solution.

Alongside a focus on peace-building, there must also be a full process of accountability for all of those that are responsible for this devastating war. That doesn’t just apply to those that have carried out the atrocities, but also those that have armed, supported and enabled them.

As Mwatana for Human Rights, a Yemeni-based human rights organisation, has said “the de facto immunity that the international community has given Saudi Arabia through its silence prevents real justice for violations by all sides.”

The chances of complicit governments, like that of the UK, changing policy of their own accord are minimal. Next September will see the DSEI arms fair taking place in East London, and, despite the horrific abuses that have been carried out, there is no doubt that the Saudi military will be on top of the guest list. While there they will be greeted by civil servants and introduced to representatives of all of the world’s biggest arms companies.

2018 has been yet another disgraceful year for UK foreign policy. Change won’t just require the ending of arms sales to the Saudi regime, it will need an end to the long-term policy and mindset that has allowed them in the first place.