The vile Bonfire Night joke that went viral on social media is not an isolated case. It is directly linked to Tory politics. Joana Ramiro explains. 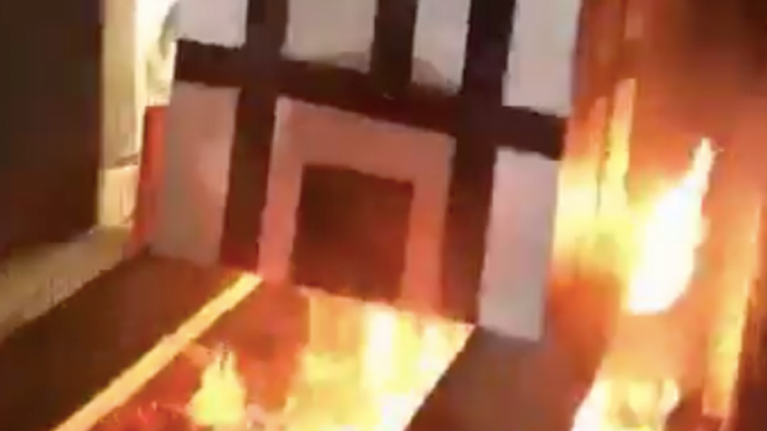 Bonfire Night is admittedly good fun, but a radical holiday it sure isn’t.

I mean, you are celebrating the torturing and subsequent execution of a Catholic over a failed plot to blow up Parliament, and the resilience of the English establishment to rebellion and dissent.

And while it has become an opportunity for many to display their discontent over the status quo – burning effigies of Boris Johnson or wearing Guy Fawkes masks – the night offers just that: an escape valve for more radical, more brutal dispositions.

When footage surfaced of a group of people burning a cardboard model of Grenfell Tower as part of their celebrations, the nation felt rightly outraged.

The video shared on social media shows an effigy of the destroyed West London tower block, including cutout figures of people on the building’s windows.

Members of the group are heard laughing off camera, making Islamophobic remarks and mocking those killed in the tragedy by shouting “help me, help me” and “jump out of the window”.

As the effigy burns down one person is heard saying: “That’s what happens when they don’t pay their rent.”

Vicious and immoral yes, but is it surprising?

Perhaps we should not be surprised by this vile act at all.

Firstly, because this country has proved over and over again that it is rife with class privilege, racism, and bigotry towards working class and migrant communities.

You know why those people in that hideous video felt burning an effigy of Grenfell tower was a good idea? Because the corporate media which is run by billionaire tax exiles led them to believe the people in that building were undeserving.

And to bigots across Britain, the residents of Grenfell Tower represent all they consider to be unwanted in this nation – Muslim families and black artists, working class entrepreneurs and vulnerable people relying on benefits to survive.

But there is another reason why we should not be surprised to see this level of hatred displayed so flagrantly on social media.

Why wouldn’t some idiots think mocking the deaths of 72 people in a perfectly preventable fire was a good Bonfire Night idea? After all, this government has been just as neglectful, just as dismissive, just as tactless towards the survivors and the local community.

When the tragedy unfolded in June 2017, the reaction of Prime Minister Theresa May was infamously disastrous.

From state-like appearances on the site of the tragedy to distant interaction with the grieving families, May and her party were incapable of showing a sliver of human warmth and genuine compassion.

The only thing Theresa May was able to do was pledge in the wake of the Grenfell tragedy was a £5 million fund to help those affected and to give survivors, families that lost everything they ever possessed, new homes within three weeks.

Yet figures released last week revealed that 151 Grenfell households are still staying in emergency or temporary accommodation – 70 weeks after the blaze.

Of these families, 25 are not even staying in temporary homes, but in hotels.

Of the 161 households living in the estate surrounding Grenfell, only two have since been moved into permanent housing. Another 77 families are living in hotels and emergency homes, while the rest ended staying in their original properties.

And rather than taking responsibility for this sad state of affairs, the government has instead placed the blame on the (equally Tory) Royal Borough of Kensington and Chelsea (RBKC), which in turn passes the hot potato back to the Ministry of Housing, Communities and Local Government.

Arrests do not equal justice

Since the Bonfire Night video went viral five arrests have been made after a group of men handed themselves in at a police station in south London.

And while it will certainly be of some consolation that the perpetrators of such a horrendous act are punished in some shape or form, can anyone really call it justice?

Have the Grenfell families seen justice since that harrowing night in June 2017? Have they seen fairness when those allegedly responsible for the blaze are still at large? Have they seen any of the British values at work when the competent authorities are still scrambling to provide a roof over their heads?

The video of the Grenfell effigy is one example of the very worst Britain has to offer, but it is not an anomaly, a freak accident, a coincidence. It is directly linked to the message the Conservatives have been sending out since taking power in 2010: That justice is a privilege of the wealthy, citizenship a privilege of the white.

If you don’t belong to either group – like the Grenfell community does not – the Conservatives have little more than contempt to spare.

And, as far as they are concerned, you might as well become the butt of a very abject joke.