A thousand people protested against inaction on climate change on Wednesday 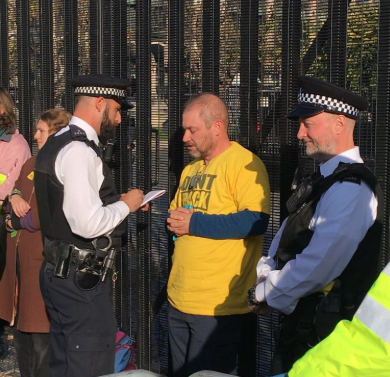 One of those arrested for obstructing the highway was Steve Masters, a father of three, grandfather, ex Royal Air Force technician and Green Party parliamentary candidate for Newbury.

He told Left Foot Forward that he’s never been arrested before:

“My grandfather was a police inspector in West Yorkshire. I’m as strait-laced as they come but the government is doing nothing, and is sitting on its hands while we’re having dire warnings of climate catastrophe”

“They’re talking about being green but they’re far from it. They continue to promote fossil fuels and are bailing out the fossil fuel industry in terms of the clean-up of the North Sea and promoting fracking. They’re lying basically.”

Many of the activists are angry that Philip Hammond’s budget on Monday failed to invest in tackling climate change. Masters told us:

“The budget didn’t mention climate change once. We’ve got less than 12 years according to the IPCC report and we need to be doing something. We need a budget for the future.”

And despite his arrest, he pledged to continue a campaign of direct action:

“The whole premise of the Extinction Rebellion system is that like-minded people take action towards making a stand. Non-violent direct action in the spirit of Ghandi and the Sufragettes, and all those who go before us.”

“It’s about doing it peacefully and probably being a right royal pain in the arse. I’m fairly sure I won’t be discouraged by yesterday’s events, I’ll be continuing to get involved. I’ll probably be up at Preston New Road [the site of long-running protests against fracking].”

Masters stressed that many involved in the anti-fracking campaign were not long-standing ecological activists:

“It’s about community and there’s a great tradition of protest by women and it’s still there right there. Women are leading this and that’s something to shout about.”

So today I went outside my comfort zone & was arrested for my part in a protest on parliament square. @GreenJennyJones thanks for the support. @sianberry sorry I couldn’t chat as I was in the van Sometimes lawful people have to unlawful things. #NVDA @ExtinctionR @GeorgeMonbiot pic.twitter.com/y17yVPpSA8

Joe Lo is a freelance investigative journalist and writes for Left Foot Forward.