Symon Hill faced a live tirade from the GMB presenter over his choice to wear the white poppy. But despite receiving death threats since, he'll keep campaigning for peace. 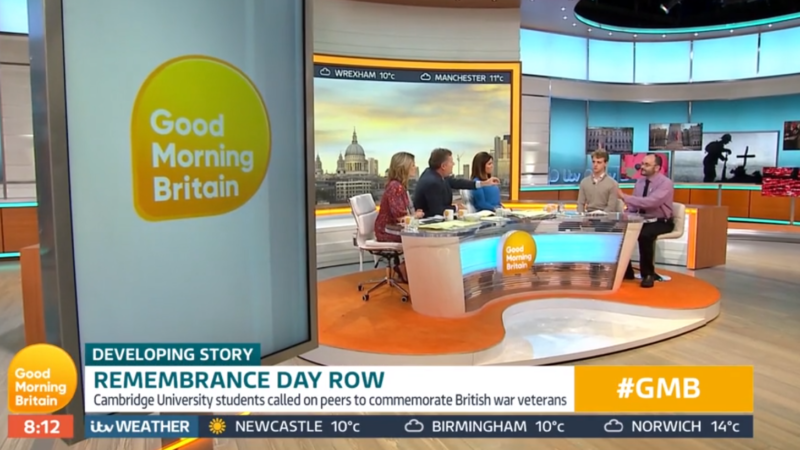 Last week, a journalist phoned the Peace Pledge Union to ask me for a comment on the news that Cambridge students had “banned poppies”.

I couldn’t comment on this – because it hadn’t happened.

Members of Cambridge University Students’ Union had disagreed about how to mark Remembrance Day. Tory students proposed a gung-ho militarist motion that was voted down. The union also rejected an amendment calling for remembrance for “all those affected by war”.

This led to reports that students had voted against marking Remembrance Day.

I was invited on Good Morning Britain to discuss this – or to be yelled at for ten minutes by Piers Morgan. When I said that victims of war of all nationalities should be remembered, Morgan moved form shouting that I wanted to commemorate ISIS to demanding a one-word answer about my views on World War Two.

There’s nothing surprising about any of this. The right-wing press are going through a student-bashing phase. Morgan’s behaviour was entirely consistent with his reputation. Anyone who differs from the militarist line on Remembrance is greeted by howls of outrage.

It is vital that we don’t dismiss these realities. The ridiculously named Democratic Football Lads’ Alliance has threatened to march in Cambridge. Student union officers have been sent death threats.

Since I appeared on Good Morning Britain, I’ve stopped counting the number of messages I’ve received saying I should be killed. The fact that I’m used to it doesn’t make it OK. My fear is that the hatred spewed out on social media will deter others from speaking out.

Prior to his election as Labour leader, Jeremy Corbyn often wore a white poppy alongside a red one. After becoming leader, he was pressurised into wearing only a red one, leading the Sun to fall back rather pathetically on the claim that he had not bowed deeply enough at the Cenotaph.

Nearly all parties talk of supporting the “military covenant” – a term not coined until the year 2000. On the whole, opposition parties leave unquestioned the government’s plans for increasing cadet forces (while other youth services are cut) and promoting a “military ethos” in schools.

Instead of ignoring militarism, the left needs to stand up to it. This includes asking why wounded and impoverished veterans should be expected to rely on charity, and asking how ministers can talk about remembering people who died in war while children in Yemen are killed with British weapons.

The way we remember the past affects the way we approach the present. In the fantasy world of British militarists, it is still 1940. Every issue is viewed through the lens of World War Two. Talk of the wasteful slaughter of Passchendaele, atrocities committed by British troops in India or the military suppression of protest movements in Glasgow and you will be accused of insulting people who “fought for your freedom”.

Ask in what way British troops are contributing to freedom today, and you will be offered outrage but no answer.

Perhaps the nastiest aspect of militarised Remembrance is the insistence that only British and allied military dead should be commemorated. This remains the position of the Royal British Legion. On no other issue have I received the level of social media abuse that follows the suggestion that people of other nationalities should also be remembered.

Behind all the fluffiness and rattling of charity tins, there is a nasty nationalistic undercurrent to “traditional” Remembrance.

There is some good news: orders for white poppies are running at twice the level of this time last year. White poppies stand for remembrance of all victims of war of all nationalities, a commitment to peace and a rejection of attempts to glamorise war.

There are thousands of people out there who are opposed to the militarisation of Remembrance. It’s time for progressive politicians, commentators and campaigners to have the courage to join them.

Symon Hill is Co-ordinator of the Peace Pledge Union.