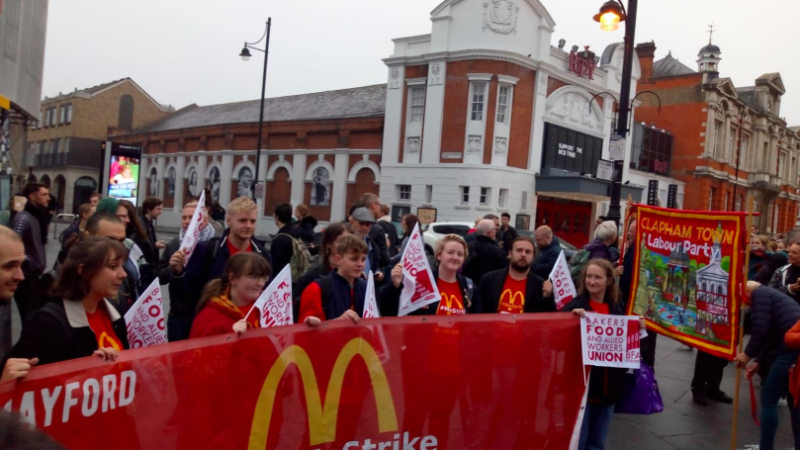 Today hospitality workers at well-known chains like McDonald’s, Wetherspoon’s and TGI Fridays have taken unprecedented strike across the country.

As part of a campaign to organise workers in areas of the employment sector that are often without trade union representation, this strike action has seen workers – many of whom are new to the trade union movement – strike for £10 an hour, the end to precarious contracts and for unions to be recognised in their workplaces.

'If we don't get it, SHUT IT DOWN!' as McDonald's workers in Brixton strike for £10/Hr and a union #FastfoodGlobal #McStrike #FFS410 pic.twitter.com/njSJ5UvTlH

For the first time in the history of the chain of pubs, Wetherspoon’s, staff in two of its Brighton establishments went on strike. Wetherspoon’s recently brought forward workers’ annual pay rise from April 2019 to November 2018.

Today is the convergence of struggles, joining hospitality workers out on strike where UberEats and Uber taxis workers, who are organised by a range of unions including Independent Workers Union of Great Britain and GMB.

Members of the Labour-supporting group, Momentum, have organised their members to join pickets at MacDonald’s in Newcastle, Sheffield and London.

Unite the Union members are among those on strike from TGI Fridays in different parts of the country.  Unite’s national officer Rhys McCarthy said:

“This is an incredibly exciting time to be part of the trade union movement. Hospitality workers are finding their voice and their power in the union.

“These workers have had enough of low pay and insecure work. They will not stand by and let their bosses pocket their tips nor cheat them out of money they’re rightfully owed.

“They are demanding not only respect but better pay and union rights, because they know that by standing together they can win.

From late last night and early this morning, activists took to Twitter to express their support for the workers on strike

UPDATE: John McDonnell joins strikes on the picket line and tells them: “the Labour party is 100% behind the strikes, the demonstrations the action that have been taken by workers to achieve a decent pay rise and achieve decent conditions at work”