We need an overhaul of employment law to ensure dodgy employers can't weevil their way out of equal pay agreements. 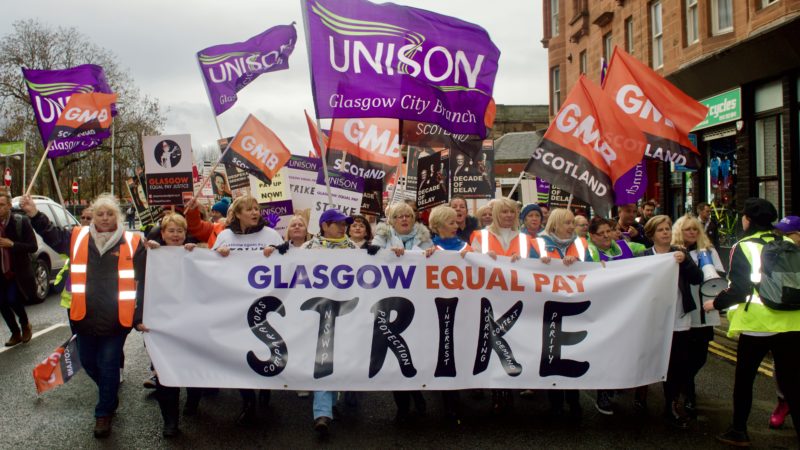 Almost 50 years after the Equal Pay Act, 8,000 women gathered on the streets of Glasgow to ask for the same wages as their male colleagues earlier this week.

The internet is rife with misconceptions about the gender pay gap. One of the oft-most propagated myths is that gender inequality has been solved because it’s already illegal to pay women less than men for the same job. Yes, it is, and it has been since 1970. But in fact, it rightly goes further than many people realise.

Women aren’t just entitled to the same wage as male peers doing exactly the same job, but also when their jobs are deemed “equivalent” to each other.

That’s because it was recognised that some roles are male-dominated, and others are female-dominated – take care work versus refuse collection, for example. If they require a similar level of skills, experience and qualifications, they may be considered “equivalent” in regard to setting pay.

This is called “equal pay for work of equal value” and it’s an important part of closing the gender pay gap because it recognises that we have a cultural tendency to undervalue work associated with women compared with work associated with men – even if they’re doing broadly the same things.

Origins of the Glasgow strike

In the late 90s, unions and public authorities in Scotland negotiated the Local Government Single Status Agreement. This scheme guaranteed one set of pay, terms and conditions across the local government workforce for both manual and non-manual workers performing roles considered to be of “equal value”.

From the very start, trade unions questioned this move. The new grading system did not reflect the original values of the Single Status Agreement – namely, to provide a true test of equal value.

To further protect its pay scheme, Glasgow Council created Cordia – an arms-length company employing workers in female-dominated sectors, which allowed it to avoid equal pay claims as well as attack other terms and conditions.

The unions fought this, challenging the legal status of Cordia and proving legally that it remained part of the Council’s responsibility. Meanwhile, they also challenged the Pay and Grading Scheme and, in 2017, the highest court in Scotland – the Court of Session – agreed that the Scheme was not fit for purpose.

Far from tackling gender discrimination, the pay gap between 2006 and 2018 had got worse in Glasgow.

But little appears to have been learned by the now SNP-controlled Council, who have used a period of negotiations since the Court of Sessions judgment to continue to prevaricate instead of reaching a settlement that meets equality standards.

The strike action is the direct result of that failure, with the affected women – working in care, catering, cleaning and education – feeling that unless they stand up for themselves, their rights will continue to be ignored. In some sectors, support for a strike rose to over 90% of the workforce.

The situation in Glasgow illustrates the hurdles and obstacles put in the way of women workers seeking the pay equality they are legally entitled to. In fact, at the main Rally on Tuesday, a minute’s silence was observed for the equal pay claimants who have died in the course of the struggle.

What needs to change

Recommendations by think tank the Institute of Employment Rights (IER) – which have been adopted by the Labour Party to much fanfare – could help. Key proposals include the establishment of a new department for employment, the remit of which would include improving equal pay legislation to make it more effective and easier to enforce.

That department will be tasked with rolling out sectoral collective bargaining. This process is similar to the one through which the Local Government Single Status Agreement was negotiated – unions and employers’ associations come together to agree minimum pay rates and conditions across their industry and then these are applied to every worker in the sector, regardless of who their employer is or whether or not they are a member of a trade union.

These agreements should be “equality-proofed” to ensure they do not have a disproportionate impact on any section of society.

If the IER’s recommendations are adopted in full, any employer who tries to get around agreed terms – like Glasgow City Council did – wouldn’t just be facing the workers, they’d be facing an independent Labour Inspectorate, which would police employers so that workers don’t have to.

Jane Carolan is former Chair of Unison NEC and former member of the TUC General Council.