Ordinary people across the world payed the price for the financial crisis. It cannot be allowed to happen again. 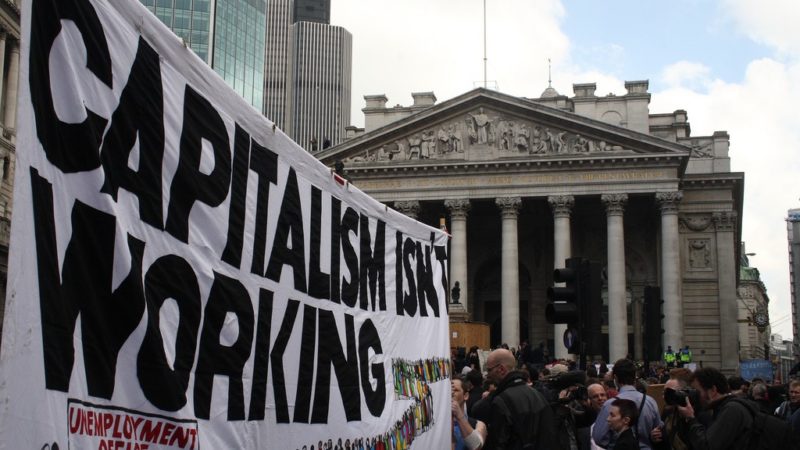 Ten years ago, with eyes wide open, a choice was made to back the banks and sell us out. The choice that matters now is whether we continue to pay the price for that – or re-write the rules.

A decade ago today, the collapse of Lehman Brothers triggered a financial crisis that sent shock-waves around the world. But after nearly a decade of international austerity, the profound political legacy left by this crisis is still unveiling itself all across Western countries: in the collapse of the social welfare net, the crisis of inequality, the politics of polarisation and the meteoric rise of the far-right.

Despite attempts by politicians in Britain and elsewhere to cast the crisis as a consequence of excessive public spending, the immediate cause of the financial meltdown is well established. In an environment of weak regulation and intense competition, US financial giants – aided and abetted by the City of London – had been engaged in increasingly high-risk and predatory lending practices, like sub-prime mortgages. They accumulated enormous risk for enormous profit because they knew they were too big to fail and that it would be the public, not the banks, forced to foot the bill.

In an interview with the Guardian this week, Gordon Brown confirmed that we are “sleepwalking towards another financial crisis.” But he stopped short of connecting New Labour’s failure to regulate the financial sector with its alliance with the neoliberal ideology of free market globalisation which.

After all, it was under his watch that let the City run wild allowing them to keep spinning their roulette wheel, hoping to make yet another cash killing in the hope that some of it would trickle back in tax revenues.

The roots of this crisis stretch back forty years and across continents and are still growing beneath our feet today. In 2013, when the International Monetary Fund (IMF) first raised the alarm over the economic and social damage caused by austerity in Europe, you’d never guess they’d spent a generation ignoring them in the Global South.

The unfettered power of big business, free trade and economic deregulation that international financial institutions like the World Bank, World Trade Organisation and IMF championed resulted in a globalisation for the very few, had put profit before people and the planet exploiting cheap labour and natural resources, and inevitably resulted in debt crises and economic crashes in Latin America, Africa and Asia.

And yet there they were again, using the opportunity of crisis to impose their ‘shock doctrine’ on country after country in the global South forcing countries to cut social spending, public healthcare and education; undermine wages and living standards; and open their economies to predatory transnational corporations, all so they could repay the debts they ‘owed’.

Ordinary people in the global South were no more responsible for the global debt crisis of the 1980s than teachers or nurses in Britain were for the financial crash.

But this crisis was neither accidental nor incidental: it is an expression of the core logic of the free market system: that the poor are expendable and the rich, untouchable.

As Britain faces its own ‘lost generation’, as the global South continues to do, with sky rocketing homelessness, child poverty a reality for a third of families in work, low wages, zero hour contracts and grotesque levels of inequality.

We face the very real possibility of more crises, financial and planetary, because the same broken economic system remains in place, and those responsible continue to ensure that it benefits them at our expense.

But the choice before us is not between a retreat into the populist economic nationalism of the far right and neoliberal globalisation. It is between whether to accept a system that puts profit before people and has awarded as much wealth to the eight richest individuals in the world as it has to the poorest 3.8 billion – or to break with neoliberal orthodoxy, terminate Too Big to Fail banking – and re-write the rules.

Asad Rehman is Executive Director of War on Want.