Women were at the forefront of the 'anti-sweating' campaign and early minimum wage debates, writes Nan Sloane in a new history of the labour movement. 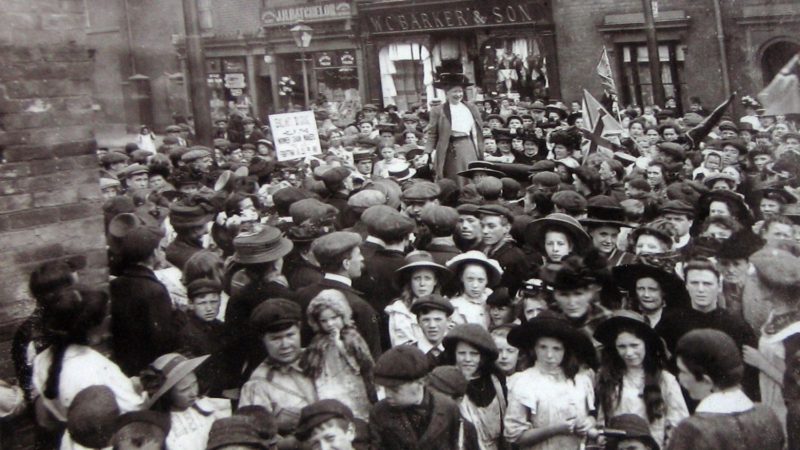 This is an extract from the upcoming book: ‘The Women in the Room: Labour’s Forgotten History’ by Nan Sloane. Pictured: Mary Macarthur at a rally.

The Sweated Industries Exhibition took place at the Queen’s Hall in May 1906 and was a huge success. It was visited by over 30,000 people who, for a small fee, entered a hall laid out in a manner described by the Daily News as resembling a bazaar.

‘But,’ added the paper, ‘when one looks at the price tickets it will surely seem a bazaar belonging to Dante’s Inferno.’ At each stall real workers carried out their trades, demonstrating all the skills for which they were so grossly underpaid.

Placards gave details of each individual, the trade, the rate of pay and the household expenses it had to cover. Visitors could talk to the workers and ask them questions. The exhibition was opened by royalty and attended by almost every politician of note.

Lectures were given by experts such as Margaret MacDonald and Mary Macarthur; over 1,500 people turned up to be harangued by George Bernard Shaw. A handbook was produced giving harrowing details of the lives of the workers accompanied by atmospheric photographs.

The National Anti-Sweating League (NASL) was established with a committee composed of a mix of people including Mary Macarthur, Clementina Black, Margaret Irwin (the erstwhile secretary of the Scottish Trades Union Congress), Keir Hardie and the Webbs, as well as the Liberal Herbert Gladstone, and Emilia Dilke’s husband, Charles. However, now that there was the prospect of real progress a serious division of opinion between Labour and trade union women came to the surface.

There were two basic approaches. One was for a minimum wage to be established for each trade by means of a wages board. This idea had already been implemented in the Australian state of Victoria, where its supporters believed it had met with some success.

Its opponents thought that such a scheme would be impossible to implement effectively and instead favoured a system of licensing for homeworkers which would enable the inspection of domestic as well as industrial premises. Margaret MacDonald favoured a licensing system, while Mary Macarthur supported wages boards.

In 1906 she spoke in support of a resolution at the Trades Union Congress (TUC) supporting the minimum wage and calling upon Labour MPs to ‘press forward this proposal in the House of Commons in the next session of Parliament’. In her speech, Mary conceded that ‘the question of a legislative minimum wage really bristled with difficulties’ and that they should have a scientific and properly researched basis. The resolution was passed unanimously.

In the ranks of the Women’s Industrial Council (WIC), however, there was no unanimity. Clementina Black, now in her 50s and hugely experienced, was an advocate of the minimum wage. Margaret MacDonald, who had been a WIC stalwart almost since its inception, and who very well understood what was required in terms of proper research, became more opposed the more she investigated.

In late 1906 she had travelled to Australia to examine the operation of the Victoria Wages Boards for herself and she returned convinced that they were not the answer. She agreed that they would discourage women from working but, given that she tended to defend women’s right to work (if not always the desirability of their exercising that right), she did not necessarily regard this as a good thing. She also thought that what was possible in the small setting of the state of Victoria was not automatically transferable to the East End of London or the back streets of York.

As the anti-sweating campaign gathered pace so too did the disagreement, and in 1907 the Labour Leader gave Margaret MacDonald and Mary Macarthur the space to debate the issue at some length over several editions.

Margaret’s case rested on four basic factors, all of which Mary Macarthur roundly rebutted. Margaret believed that the minimum wage was ‘diverting our energies from the direct fight for Socialism in order to advocate a palliative which, in my opinion, would not only be ineffective, but in some cases positively harmful’.

Mary replied that this was effectively saying that ‘the same argument must apply equally to all factory legislation…and, if we follow this line of reasoning to its logical conclusion, Socialism must be further off now than it was fifty years ago’.

Secondly, Margaret contended that it was not possible simply to replicate the Victorian Wages Boards in the larger and much more complex economy of Britain. She cited figures which gave the number of industrial workers in Victoria as 112,610 men and 32,669 women, while in Britain ‘returns for 1899 of persons employed in factories and workshops give 1,528,881 females and 3,077,108 males’.

This, she argued, would make the Victorian model, where both employer and employee members of wages boards were elected by their relative sides, impossible to set up, and would thus give the Secretary of State, who would be appointing the board members, a significant power which his counterpart in Australia did not have.

Read the rest of the story: ‘The Women in the Room: Labour’s Forgotten History’ by Nan Sloane will be launched on the 24th September.