McDonnell says it's 'too late' to lock up those who caused the crash - and discusses whether we need a 'People's Vote' to stop Brexit wreaking economic harm. 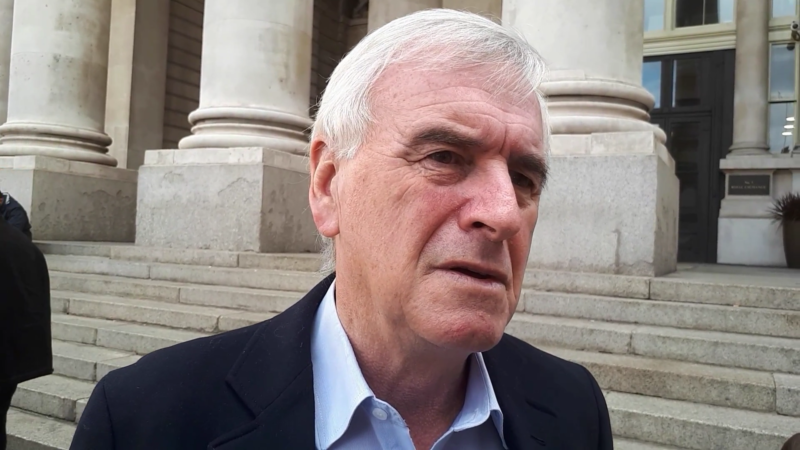 Ten years on from the collapse of Lehman Brothers, progressives have been reflecting on responses to the crash. In the run up to Labour conference, we ask: how would Labour govern the finance sector?

In an exclusive interview with Left Foot Forward, I spoke to Shadow Chancellor John McDonnell about the impact of the crash, Labour’s role, what needs to happen now – and whether Brexit poses the risk of another crisis.

Josiah: Do you think enough has changed since the crash? What needs to happen now?

John McDonnell: “We’ve seen eight years of austerity, and ordinary people have paid the cost of the crash itself. And its the deepest of ironies and anguish that the people who’ve caused the crisis have made huge gains from it, from quantitative easing and asset prices.

“So the first lesson is to recognise what suffering it caused. The second is that, yes, there’s been greater regulation but the finance sector is still not serving the interests of the wider economy. Graham Turner’s report we commissioned demonstrated that the productive economy is creating wealth, but where? Not in manufacturing but in speculation. So the lessons haven’t been learnt.

Have the victims of the crash seen justice?

“No of course not. There’s a million people out there who aren’t getting social care. Four million children in poverty…70,000 kids being are brought up in temporary accommodation. They’re the victims and we haven’t seen justice at all.

Earlier, Unite’s Steve Turner was calling for a criminal investigation into those who caused the crisis. Would you support that?

“There needs to be a proper investigation. There’s only one banker [Ed: The number is five] who went to prison and yet at the same time we’ve got millions of people who’ve had eight years of suffering.

Would you like to see more bankers locked up?

“I think it’s too late for that now. I really do. The time has passed, but I’m angry, I’m angry it’s the people who have suffered and not the people who speculated into the crisis.”

‘New’ Labour were in charge in the run up to the crash, so who’s to blame?

“There’s a culture from the early ’80s – I remember working with Dennis Skinner publishing The Casino Economy, about the Big Bang – that’s when the deregulation started and it went on for decades.

“That culture of free-market neoliberalism actually hegemonised the whole political debate for the next two decades. At that point the left, backbenchers, we were producing alternative budgets, calling for tighter regulation and nationalisation of the finance sector to give the state a bigger stake in the finance sector. Some of the ideas if they’d been listened to may well of – at least if not avoided the crash – ameliorated its impact.”

“There’s got to be further regulation and we’ll be bringing forward ideas on that, in addition to [adopting] the whole concept that the finance sector isn’t the master of the economy but the servant of the economy.

“That means we need to make sure they provide the resources – a Financial Transition Tax – making sure we have a structure for direct investment, a strategic investment plan, bringing together the Treasury, Bank of England, the finance sector, business leaders and TU leaders, so we harness the resources and plough them into research and development, tackling the fourth industrial revolution, [and] developing skills. In that way, through a national investment bank and regional investment banks, we’ll be turning the economy around.”

What about a wealth tax?

“We’re going to be consulting on a whole range of proposals at the next election itself. We put forward at the last election a Land Value Tax, so there’ll be issues like that we’ll be looking at in the run up to the next election.”

Brexit is going to see a significant hit to the economy. Is the role for a Labour party to stop that happening?

“If we get a ‘no deal’ Brexit there will be serious economic and financial problems, no doubt about that. The issue for us is how do we avoid that. We’re saying to the govt they should negotiate a Brexit that protects jobs and the economy. They’re not capable of that.

“That’s the only responsible thing they should be doing. Failing that – General Election. On that basis, we’re going to have a real discussion about policies and people can choose the teams for doing the negotiations.”

Do you see a General Election as the alternative to a ‘People’s Vote’?

“I want a General Election, I don’t want to let these Tories off the hook. I want them out there explaining their policies, not just on Brexit but on other issues as well. And I want people to be able to choose the team that will then take us forward.

“I’m still saying all options are on the table. We’re never going to reject any form of democratic engagement so a People’s Vote is still on the table – but I want a General Election.”