Caroline Lucas has agreed to meet Woman's Place UK, who are opposing changes to the Gender Recognition Act, while a former AM has 'dared' the party to expel him over the issue. 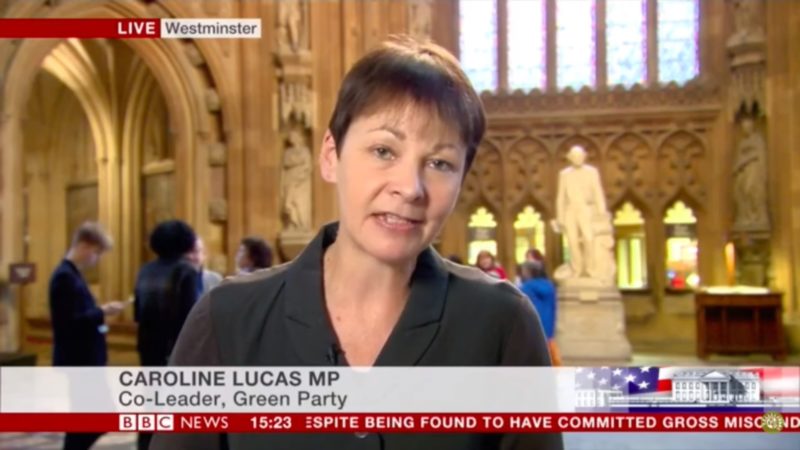 A debate on gender identity and trans rights has broken out in the Green Party, after Caroline Lucas MP agreed to meet the main organisation opposing a shift towards gender ‘self-identification’ in proposed new legislation.

The outgoing Green co-leader published a piece titled ‘I look to a future in which Aimee Challenor being trans doesn’t matter’, after Ms Challenor was forced to stand down from the deputy leadership race in August.

Aimee Challenor, a trans activist and the party’s former Equalities Spokesperson, was suspended by the party after it emerged she had appointed her father as election agent while he was facing prosecution for serious crimes including child rape. Ms Challenor resigned earlier this week, citing ‘transphobia’ in the party.

Caroline Lucas had criticised the debate over self-ID for being ‘nonconstructive’, in the wake of the scandal:

Thanks for sharing this – raises some really interesting points that I agree need to be part of an honest dialogue. 100% with you on the damage being done & how fearful people feel. Let me know if it would be useful to speak more.

Lucas has now agreed to meet Woman’s Place UK – the main platform for those opposing changes to the Gender Recognition Act:

Completely agree and am already doing that. Am in contact with Woman’s Place & hope to meet next week

Greens were quick to condemn Lucas’ meeting with Woman’s Place UK, who organise meetings across the country surrounding the Gender Recognition Act, and call for female-only spaces – including women’s refuges and prisons – to be maintained and ‘where necessary extended’.

Now one of the party’s longest-standing politicians – former London Assembly member Darren Johnson – has ‘dared’ the Green Party to expel him for saying ‘I do not believe males can become females’:

“I felt compelled to speak out when Woman’s Place UK were dismissed as a far-right hate group [by Aimee Challenor] after Caroline Lucas agreed to a perfectly reasonable request to meet them and discuss their concerns.

“Women like Ruth Serwotka of WPUK are lifelong socialists, feminists and trade unionists. They are not far-right hate figures and just as there is now an open discussion about gender, sex and identity within other parts of the left there needs to be in the Green Party, too.

“The Green Party’s current position [that trans men are men and trans women are women] is maintained not through any genuine consensus in the party but through a culture of bullying, fear and intimidation should anyone deviate in the slightest from the agreed party line.

“It would be sad if I were to be expelled from the Green Party after 31 years of continued membership but if that’s the price I have to pay for helping bringing about a genuine, open and honest recognition in the party that there are different legitimately-held views on the definition of gender and its role in human society then it will be a price worth paying.

“Green Party Policy is that trans men are men, trans women are women, and non-binary gender identities exist and are valid. Why [Darren] did not discuss this during the debate process for this policy I do not know.

“By stating what he has, he has excluded a large number of Green activists who dedicate their lives to the party and that is unacceptable. He has let down a community who I believe largely felt they could at least rely on the Green Party to stand beside them.

“I hope Darren take this moment to remember what party policy is, listen to the backlash he has received, and to apologise. Men need to stop telling people how they can and cannot identify.”

OK, @TheGreenParty friends, let’s make this clear: if you 100% support our trans & nonbinary members, and will fight any attempt to water down the party’s support for them, retweet the crap outta the flag. pic.twitter.com/MNLWPWvdZv

Unnerved by Greens who think this is the perfect time to begin their pushback on trans rights. It reads as opportunistic, when there has always been the opportunity to “make your point” in the party’s democratic process.

One Green politician – who didn’t wish to be named – told this site:

“The party needs to look carefully at its blanket support for self-ID. This is a very complicated area for a lot of people and women in particular need to protected.”

“This reaction is an attempt to prevent a female leader of a political party from meeting with people concerned with the rights of women and girls and whose opinions and experience may help the Green Party deal with a crisis over safeguarding.

“The wild and offensive accusations levelled at us are a deliberate strategy to deter people from listening to women and hearing our concerns. It should not be tolerated in a democracy.”

“The current nature of the debate about gender identity often doesn’t seem constructive. Having met with a number of constituents who share the views expressed by A Woman’s Place UK, I think it would be useful to meet the group with a view to listening and trying to understand their perspective.

“I’m deeply concerned that many women, including trans women, feel frightened and worried about their safety and I think I have a responsibility to try to find a way to help, and that means listening to all sides in the debate, even where I don’t agree. I remain committed to Green Party policy and to upholding the current laws protecting trans people.”