The outgoing Lib Dem leader is pushing some bold - and risky - reforms of the party. 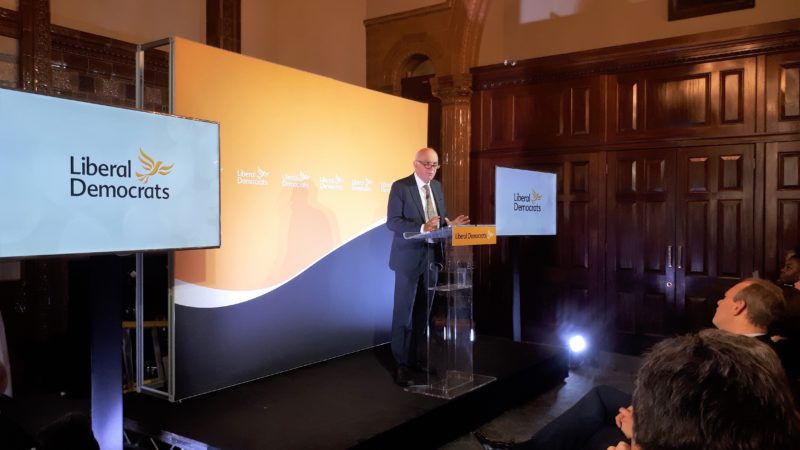 Vince Cable presented his plans to revamp the Liberal Democrats at the National Liberal Club today. Here’s what we learnt.

1. Cable has met with those pushing a new party

In July, the Lib Dem leader denied plotting to found a new party – despite missing a crucial Brexit vote for a ‘private meeting’, apparently with other centrists.

Now has has responded to those claims directly – saying he has been warning against the founding of new parties: “It is patently clear from the open contempt shown for many Labour MPs by Jeremy Corbyn’s hard left supporters that a schism is likely.  Some Conservatives are in a similar position.  Meanwhile, there is a smattering of business people around talking in hushed tones about a new party.

“I have met with some of these people to argue the case that it’s easier in our electoral system to work with existing party structures, and with people who have a set of shared values, than to try to compete.  We hang together or we hang separately.”

It costs £3 to join Labour’s scheme – a token amount to stave off trolls.

As a paper published to coincide with the speech points out, the Lib Dems’ Federal People Development Committee is already consulting on the introduction of a registered supporter scheme, “to broaden the appeal of the party and bring thousands more people into our movement.”

The leadership backs these plans, claiming “research shows that approximately twice as many people are likely to join a free scheme as to join one with even a small fee attached.”

Cable wants to learn from “groups like More United, 38 Degrees, Avaaz and Change.org” who have shown how to engage hundreds of thousands in new movements. He notes: “The Lib Dems already have an army of voluntary helpers and deliverers, as well as 200,000 online supporters over and above our 100,000 members, who loosely identify with us and campaign with us but currently have no say.”

But in giving outsiders a say, there are fears that ‘infiltrators’ could join the party to change policy or sabotage a leadership race – fears that Labour faced during Jeremy Corbyn’s election, and now in the Tories through Arron Banks’ attempts to push the party in a hard-right direction.

Pro-independence supporters in Scotland could for example push the Lib Dems in a pro-indy direction – and Labour left-wingers in theory could sway a Lib Dem leadership result if there are no barriers.

The ‘arbitrary’ minimum membership time of 12 months before people are allowed to stand for office will be scrapped, if the plans pass.

Cable said: “At the moment of their greatest political enthusiasm, we erect an arbitrary barrier to their progress.  If they are good enough, and can get approved, they should be able to stand for Parliament on a Liberal Democrat ticket and to do so without delay.”

And – crucially for this small party – leadership of the party will be opened up to non-MPs. There have been rumours anti-Brexit campaigner Gina Miller would be encouraged to stand – but she has ruled this out.

Cable said the party needed to look ‘outside’ its ranks: “The truth is that there are many talented people with proven leadership ability – in the professions, the armed forces, the voluntary sector and business – and who share our values but who have not pursued a parliamentary career.”

The 75-year old Cable said: “I do not wish to emulate Gladstone who kept going into his mid-80s nor any wish to outlast Robert Mugabe.”

“Once Brexit is resolved or stopped and if the new rules are agreed, that will be the time to conduct a leadership contest under the new rules.”

‘Brexit being resolved’ if a vague enough timeline to give him some breathing room, but his departure will almost certainly be in 2019.

5. The Lib Dems are hoping for a Trudeau or Macron moment

Cable indirectly pointed to the success of Emmanuel Macron’s En Marche! movement in France, as well as Justin Trudeau’s Liberal surge in Canada. The 2015 election there saw the Liberals go from 36 seats to 184. “There are encouraging counter-currents and we need to learn from them,” Cable said.

But he warned that attempts to form a new party were doomed: “In Britain there is the additional problem of a first-past-the-post voting system which entrenches the position of the two established major parties.”

6. He wants to learn from Momentum

In building a ‘movement for moderates’, Cable is seeking to emulate the success of left-wing Labour group Momentum, which has been has ‘highly successful in mobilising and engaging young people’.

“Momentum’s key ingredient is the energy and enthusiasm hundreds that thousands of people have for this radical political vision. Without it, a ‘Moderate Momentum’ will remain a sad contradiction in terms.”

7. He wouldn’t go into coalition with Labour or the Tories

Though determined to stand down after Brexit, another snap election (say, after a Tory leadership challenge) isn’t totally off the cards.

I asked him if he’d consider going into coalition with Labour or the Tories. His reaction was a cross between disgust and amusement: “No.” A bold statement given he wants the Lib Dems to be a party of government.

At any rate, the Lib Dems should be congratulated for trying to open up and take advantage of anti-Brexit sentiment outside the party. Who knows what could happen if the party reforms pass?