Aid should not be a tool of business and military interests. It ought to be a mechanism for the global redistribution of wealth, a form of reparations for the historical injustices which underlie global inequality today. 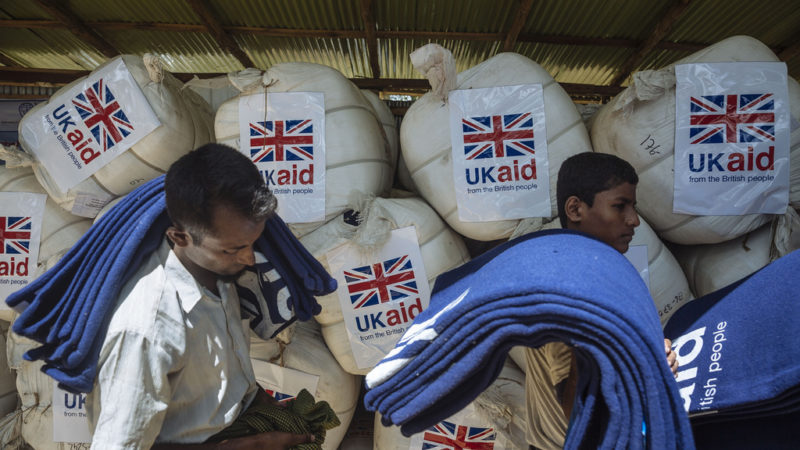 As Theresa May returns to the UK after her three day African tour, and we try to shake the image of her deranged dancing out of our minds, we should note that this wasn’t just an occasion for bad PR.

Behind the bizarre moves and May’s disingenuous praise for Nelson Mandela and Britain’s role in ending (read: sustaining) apartheid, the government used the trip to deepen relations between the UK and a variety of African states, in the search for new markets for British business.

Bound up with all this was the most explicit statement yet from a British government about the purposes of development aid: “I am also unashamed about the need to ensure that our aid programme works for the UK”, May announced in Cape Town on Tuesday. We’ve heard this language before from UK officials. What this usually means is more aid diverted into the for-profit private sector, more support for questionable privatisation projects and an increasing focus on diverting funds to military-led projects in the name of ‘security’.

These tendencies have been underway for several years. In 2011, Andrew Mitchell, then Secretary of State for International Development, set the mould in appearing to link the UK’s aid programme to the promotion of sales of Typhoon aircraft to India. The Conflict, Stability and Security Fund has channeled aid money to human rights abusing security services in countries such as Bahrain and Burma. More recently, attention has turned to the government’s use of aid money to support private schools, including in Kenya, the final stop on her trip, where teacher unions have blasted DfID-funded schools for providing ‘poor quality education’ and in any case being unaffordable to many.

This indulgent approach to corporate interests came across in one of the announcements that received little attention in the media – the creation of a new fund to fight financial crime, especially in southern and eastern Africa. On its face, supporting efforts to clamp down on illegal flows of money from crime, fraud and corruption seem unobjectionable. But entirely absent from the proposed scheme, or any of the government’s announcements, is any reference to tax havens. This is despite evidence that tax havens cost Africa tens of billions each year.

There’s plenty else to be worried about. One of the key mechanisms for delivering UK aid, the Commonwealth Development Corporation (formerly the Colonial Development Corporation), has face sustained criticism for its unaccountable nature,  being dominated by personnel drawn from the corporate sector and, in its investment decisions, seemingly confusing profit with development. Yet under one of the government’s key announcements this week, the CDC will be given £3.5 billion to fund private business in Africa. May’s Cape Town speech also included references to the use of aid for security purposes – despite evidence that this has led to UK aid funding human rights abusing regimes – and ‘putting more resources into countering illegal migration’. We’re entering a truly Orwellian world when ‘poverty reduction’ becomes code for controlling migration flows.

Instead of using aid as a tool of business and military interests, we should be fighting for something radically different. Aid ought to be a mechanism for the global redistribution of wealth, a form of reparations for the historical injustices which underlie global inequality today. As Brexit looms and Britain redraws its role in the world, this is an important battleground for the left.