Lecturers are balloting for strike action after years of plummeting pay. General secretary, Sally Hunt, urges university and college bosses to do the right thing and accept the demands. 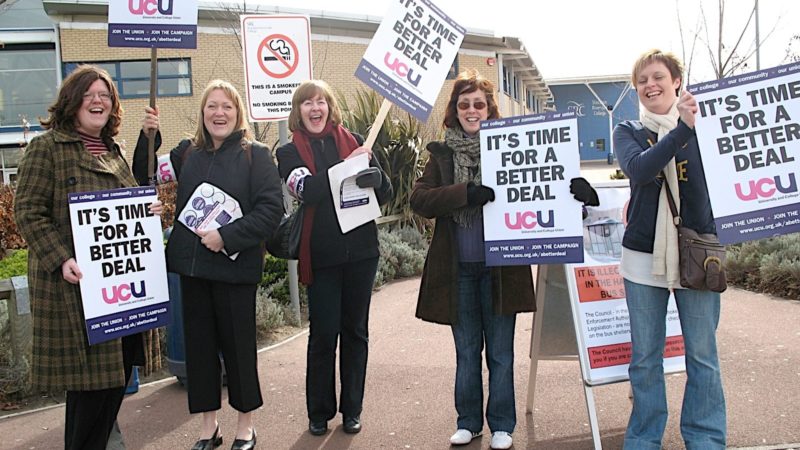 Today over 80,000 members of the University and College Union (UCU) will receive ballot papers asking them to back strike action in an effort to defend their pay.

Members at 110 colleges in England and 147 universities across the UK are being balloted because they have had enough of lousy pay deals from their employers. Deals which have seen their pay held down year on year, while those at the top have been making headlines for their inflation-busting pay rises, incredible pay-offs and ability to max out an expenses account.

No one could accuse college or university staff of being greedy. In universities, staff have seen their pay decline by 21% since 2009. While college lecturers are paid £7,000 less than their contemporaries in schools and their pay has fallen by 25% over the past decade.

Meanwhile, a third of college principals enjoyed annual pay hikes of over 10% in 2016/17.

These excessive pay hikes have been embarrassing for further and higher education and even prompted ministers to speak out. Universities minister Sam Gyimah is the latest in a long line who has promised to clamp down on senior pay and perks. While skills minister Anne Milton recently criticised college heads who were paid way in excess of the rest of their workforce and accused them of not valuing their staff.

However, we need more than strong words from ministers if we are to resolve this year’s pay disputes. It is disappointing that the government has refused a request from the Association of Colleges for extra funding specifically for pay rises, but that does not let colleges off the hook when it comes to sorting out pay.

After years of holding down staff pay, colleges would have been very foolish to rely solely on a plea to government to meet staff pay expectations.

They cannot simply abdicate responsibility and must find the money from other sources. Staff will not stand for more excuses, especially after a number of UCU branches won improved deals just a few months ago after taking strike action.

Similarly, staff in universities have heard excuses about there not being the money for pay rises too many times. Over the last five years universities’ surpluses and reserves have increased, yet staff pay continues to fall in real terms. Universities also refuse to tackle the high levels of casualisation in our institutions, the gender pay gap or the stress brought about by high workloads.

While UCU members wait for their strike ballots to arrive, we invite the employers to avoid disruption and to finally make a decent offer on pay.

Sally Hunt is General secretary of the University and College Union (UCU).