Green Party deputy leader Amelia Womack was invited to speak at this year's Boomtown festival on how politics should be about community engagement. Here's what she had to say. 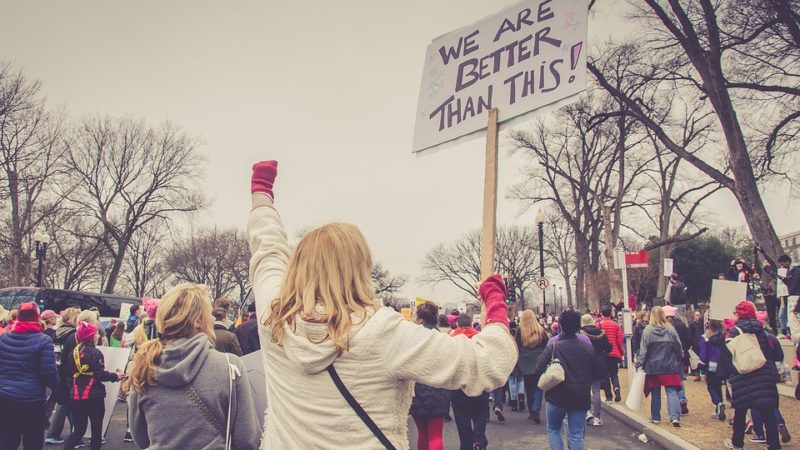 How do we re-engage with people with politics? It’s such an important conservation, especially right now. After all, we live in a time where politics is inspiring and engaging a whole new generation of activists.

With many campaigners feeling like they are ‘running to stand still, it’s clear that we’re living in some discouraging times. The UK is bolting towards a Brexit straight out of Jacob Rees-Mogg’s greatest fantasies, austerity is still tearing apart the fabric of our communities and the world is seeing authoritarians rise to power in a number of different countries including Turkey, the Philippines, and America.

So yes, it can be very easy to give up hope and disengage from politics. But the truth is that there is hope.

Personally, I’ve taken a lot of inspiration from the campaign of Alexandria Ocasio-Cortez, 28 year old socialist from the Bronx in New York who is on course to become the youngest ever woman elected to the US Congress. After all, she has a bold message: standing up for working people, investing in her country’s health services and getting the mega-rich to pay their fair share. All of these issues are things that we on the left can get behind.

But what inspires me most about her has been her ability to get people out to the polls who normally don’t vote. Her campaign didn’t just want to talk to the same people everyone spoke to, she wanted to engage young people, working people, people from minority backgrounds and anyone else who felt the political system wasn’t for them. And it worked, she beat her establishment opponent by engaging with people he never considered it worth speaking to.

This is such a powerful time for people to re-engage with politics and inspire others to do the same.

Not just re-engaging, but engaging

I’ve always seen politics as part of our day to day lives, from my first successful campaign to get lockers at our school when I was 12, to reading every piece of political literature in my first election so that I knew I’d be voting for a party I truly believed in. But of course this isn’t the same for everyone. For a lot of people it’s not just a case of re-engaging with politics. If anything it’s about engaging with politics in the first place.

As deputy leader of the Green Party, I travel the country listening to and working with many different people; some of whom are very politically engaged. They go to every march, read every op-ed and, when they find a candidate they believe in, knock on every door.

But I also find myself meeting a lot of people who aren’t engaging with politics, but will never struggle to talk about political issues.

The truth is that a lot of people who ‘don’t do politics’ are in fact engaged, but our society has taught them that ‘politics’ is something a politician does, like how surgery is something a surgeon does. The truth of the matter, in my view at least, is that what we really need to do to engage people in politics is show that politics is about each and every one of our lives, regardless of titles.

Don’t know how to get involved in politics? Start at the local level.

Doesn’t matter if it’s in a neighbourhood, town or village. There is no such thing as an issue too small to care about. After all, former US Speaker of the House Tip O’Neill once said “all politics is local”.

For any campaign to win, you need people on the ground with passion and local knowledge, whether that’s something as big as tackling climate change or as simple as getting a pothole filled in or a statue of an iconic woman from your town to tell stories of someone’s life that’s been lost to history because of their gender. I say simple rather than small because those acts make a valuable change to a local community.

Having a vision for your community and delivering that change is powerful, it inspires and it proves that we all have the potential to make a difference.

And once you’ve started, once you’ve made that difference, don’t be afraid to take the next step. Every city councillor, every Member of Parliament, even every Prime Minister started out as an activist for what they believe in. Admittedly for some that cause is getting themselves a job, but it’s a cause they believe in nonetheless. Get involved, work on local campaigns and issues you believe in.

And if you want to, look to contest an election for your party. Doesn’t matter if you’re young or old. We have a councillor in Knowsley named Kai Taylor who was elected at the most recent local elections aged twenty, while our Health spokesperson Larry Sanders is still involved with us at the age of eighty-three.

I also think it’s vitally important to say that if you do the right thing, if you fight for what you believe and engage with people then the voters will back you.

For a long time now, Sheffield Council have been felling trees in their area. A local Green activist Alison Teal was elected to the council in 2016 with a tiny majority, on the promise that she would fight the tree felling.

From outside Sheffield, it might seem like a frivolous campaign. But in the city itself this is a massive local issue. So when the people of her ward saw Alison fight to protect the trees in her area, when they saw her getting arrested fighting for her community, they listened.

I mention this not to brag about our amazing councillor in Sheffield, but to tell you not to be afraid. Not to doubt whether you can make a difference. Before she was elected, Alison was an activist. And she’s surrounded and supported by people who are not politicians, they are ordinary people who want to make a difference.

And politics isn’t just about running for office because your actions, ideas and hard work can see you through. Creating change is about communities, not just politics.

Getting the message out

But we can’t just talk about what individuals need to do, what people on the ground need to do. Sadly, what popular culture defines as the political landscape just doesn’t reflect what ordinary people look like. Only fifty two out of the six hundred and fifty MPs elected in 2017 were from a BAME background. Only 32% were women, an upward trend yes, but still a way off 51%. While there has been an increase in the representation of young people in recent years, the average age of the leaders of the three traditionally largest parties is sixty eight.

If you’re a woman, from a minority background, from the LGBTQIA+ community, have a disability or are a young person, there are barriers in place. That’s why it’s so important to push for your voice to be heard, because sadly if you’re a political minority you won’t just be handed a platform. In this regard, social media is your greatest friend.

Black Lives Matter, Shout Your Abortion and Me Too started as hashtags, before becoming incredible cultural movements in their own rights. Twitter gives people the power to tell their story in ways they never could before. Journalists read Twitter and they talk about what Twitter’s talking about. So use that, get some activists together and start an online movement.

If you don’t engage then politics is happening to you, and not for you

Politics isn’t an abstract void. It’s something that if you’re not out there influencing then someone else is.

We must always remember the power of our own voice and also the power of our voices when we work together. I often imagine campaigning like a 2p machine that you get in arcades. You might just be adding your individual coins, but it takes just one to tip the balance and makes you win

Politics will carry on whether you engage with it or not.

The truth is that the people who have any power over you in your life care about politics because they want to maintain that power, and they will use the instrument of politics to improve their lot and by extension make your life worse. If you or the people you know willingly disengage from the system, the system goes on.

So please, get involved. Fight back. Campaign not to just make your own life better, but also the lives of those around you. You will inspire others to take that step with you, and our numbers are what makes the fight both worthwhile and winnable.

I’ll finish by saying this: People make change happen; it doesn’t matter if they are in Parliament or out on the streets. So if you believe in something, fight for it. If you want change, make it happen.

You have nothing to lose, and you have everything to gain. People have the power.

Amelia Womack is the Deputy Leader of the Green Party