Hundreds of far-right activists are set to take to the streets to celebrate the visit of the US President. Stand Up To Racism Sabby Dhalu explains why we must confront them. 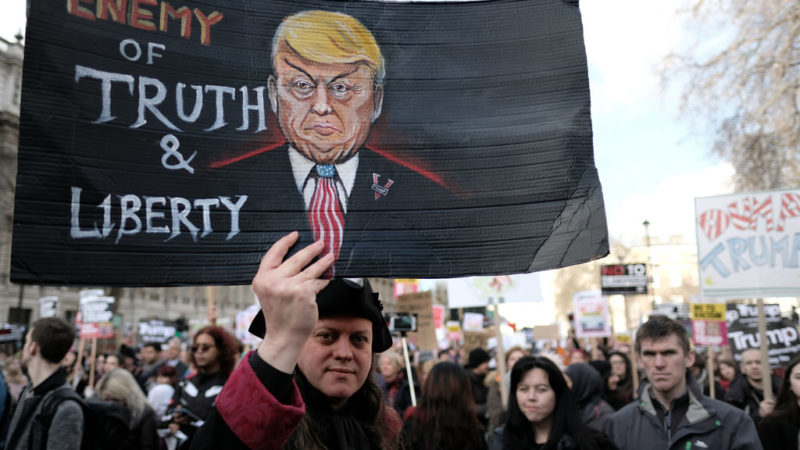 When Donald Trump retweeted a series of fake videos last November from Jayda Fransen, deputy leader of the fascist Britain First, it laid bare a chilling process which is about to reach another crucial moment.

The purpose of the videos were clear. To whip up the most vicious anti-Muslim, anti-immigrant sentiment, based on lies. A tactic already at play in Trump’s presidential campaign and subsequent ‘Muslim Ban’, and one which far-right organisations across Europe and America are using to reorganise and grow.

In Britain, following the defeat of the British National Party (BNP) and the English Defence League (EDL), and the imprisonment of Britain First’s leaders for hate crimes, a new wave of far-right street movements and parties are now emerging.

These new fascists are emboldened and normalised by the agenda of the most powerful politician in the world, and using the model of other parts of Europe where racists, anti-Semites and Islamophobes are now part of mainstream political furniture.

Their current focal point is former EDL leader Tommy Robinson, who after building up a massive social media following (including many thousands of Trump supporters), organised a ‘free speech rally’ bringing together a who’s who of the western world’s far-right in front of around 3,000 people in May. He subsequently managed to get himself imprisoned for repeated counts of potentially prejudicing a court case. A month later a ‘Free Tommy Robinson’ rally saw the same groups spout the same hateful smears at a crowd triple the size.

Among the usual neo-Nazi and fascist groups were Geert Wilders, the Dutch MP previously banned from Britain for hate speech, Raheem Kassam, who read a message from his former Breitbart boss and Trump chief of staff Steve Bannon, and UKIP leader Gerrard Batten. The ‘Football Lads Alliance’ (FLA) splinter-group the DFLA, initially able to pass themselves off as an anti-terrorist group, now unmasked as an Islamophobic hate-mob, had also mobilised in numbers.

Their next event is tomorrow – Saturday 14th July.

Among the usual suspects, the rally is set to be addressed by Paul Gosar, a hard-right Republican member of the US Congress.

The Metropolitan Police report that a “Welcome Trump” march will join the far-right rally after marching from the US Embassy.

A major reorganisation of the far-right has taken place, orchestrated by the likes of Steve Bannon and fed by the rhetoric of Trump. The numbers present, the violence shown, and the Nazi salutes on display on 9th June were a massive wake up call to the anti-fascist movement.

Stand Up To Racism and Unite Against Fascism have been mobilising against and warning about the FLA and DFLA across the country since their inception and exposing Tommy Robinson since he founded the EDL. Following the rally on June 9th, we put a call out for a unified and resolute campaign to halt the rise of the far-right. The response was overwhelming.

Over 100 MPs, MEPS, trade union, faith and community leaders, and over 60,000 others backed a statement supporting today’s Together Against Trump demonstration and tomorrow’s mobilisation against the far-right.

Unite’s Len McCluskey captured the response perfectly when he said:

“The far right is trying to divert working class anger from the real issues and twisting people’s pride in their country to spread hatred and division. The trade union movement needs to tackle this head on.“

Before Trump had even arrived in Britain, he was spouting anti-immigrant rhetoric at the NATO summit in Brussels.

There can be no doubt he intends to pursue this agenda throughout his visit, and the consequences are clear. Hate crimes have soared in recent years, and the rise in far-right activity has risen alongside it.

A recent pro-Tommy Robinson protest in Leeds was followed by attacks on a local mosque and Sikh temple. Muslims are the immediate target, but our entire multicultural and diverse society is under threat.

Today we march against Trump and the bigotry he spreads. Tomorrow we show that there is no place for the fascism that grows in his wake.

Sabby Dhalu is the co-convenor of the Stand Up To Racism campaign.