Six activists from Surrey and Sussex are the latest to face attempted injunctions against protest. We must join with them, writes Green Party co-leader Jonathan Bartley. 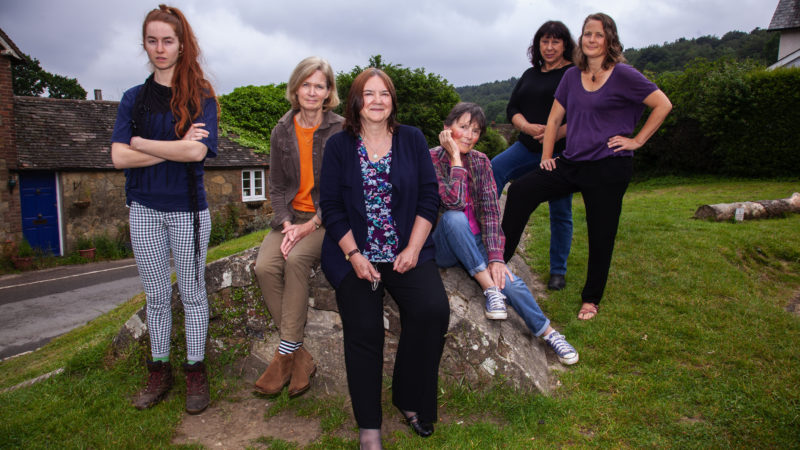 On Tuesday, six women took on an oil company in the High Court in a bold bid to protect basic democratic rights.

The brave Surrey and Sussex Six, as they have come to be known, are challenging an application from UK Oil and Gas (UKOG) to instate a draconian injunction to cover two of its fossil fuel exploration sites.

If successful, it is not clear quite how many people will be restricted by the injunction or indeed what actions will even be considered ‘illegal’. But the efforts look like an attempt to silence peaceful protest.

The community in Surrey and Sussex have good reason to stand up against the destruction UKOG has planned. Not only do the company’s methods of oil exploration risk contaminating local water and causing air pollution, but precious countryside will be concreted over to make way for the industrial development. And to stand any chance of meeting Britain’s climate targets it is essential fossil fuels are kept where they belong – in the ground.

When all other avenues of resistance have been exhausted, the right to peaceful protest is all communities have left. But as we have seen, that right is under concerted and consistent attack.

The application from UKOG is part of a nationwide roll-out of injunctions to stifle dissent. Across the country the blunt and over-heavy cudgel of legal prohibition is being invoked to suppress people’s basic freedoms. From Sussex to Sheffield and Lancashire to London, draconian decrees are criminalising those who put their bodies on the line in the fight to protect local communities and our planet from environmental destruction.

I have also been to Hillingdon where an attack on peaceful protest has been launched right from the top of government. Transport Secretary Chris Grayling has taken the unprecedented step of securing an injunction against anti-HS2 protestors, and their efforts to stop the environmental vandalism of the £50bn high speed rail project.

Six months ago in Sheffield the Green Party’s councillor Alison Teal was found not guilty of breaching an injunction brought by the council, which had been designed to stop protesters obstructing the felling of healthy street trees.

Brave campaigners recently won the right to challenge an injunction by fracking company Ineos. Meanwhile another dirty fracker – Cuadrilla – has taken out one of its own against protestors at Preston New Road.

In each of these places campaigners had already used the democratic process to show how huge numbers of local people were opposed to the damage and destruction being unleashed on their communities. But they were ignored. In Lancashire, the community said a firm no to Ineos.

The local authority refused permission for fracking – only for the government to ride roughshod over their wishes and push the license through. Protest – and putting their bodies in the way – is the only option left. And now the community is even having that right taken away from them.

The brave defenders on the front line in Lancashire – as in Sheffield, Surrey and Sussex – have public opinion on their side. Last year support for fracking fell to an all-time low.

And is it no wonder. Fracking is dirty, dangerous and unnecessary. Like the risky methods UKOG are using for oil exploration, it is a threat to our environment and jeopardises our climate targets.

The government’s reckless pursuit of oil and gas reveals a gaping chasm in the greenwash Michael Gove has attempted to pour all over his party. Repeated delays not just at Preston New Road but also at the Kirby Misperton fracking site in Yorkshire have revealed an industry plagued by desperation and incompetence.

Fossil fuels should be left dead in the past.  They will never deliver what Britain needs. Yet the government keeps throwing money at its rotting corpse instead of investing in the clean, renewable energy we need.

Last year the cost of onshore wind plummeted, while renewable energy accounted for one third of the electricity generated in the UK.  In the summer sun, solar has just broken new records in Scotland. And Germany produced enough renewable energy in the first half of 2018 to power every household in the country for a year.

This is the future that we could harness if the political will were there. Across the country campaigners are bravely putting their bodies on the line in the fight for this future will be recognised in years to come as the heroes who stood firm as big businesses, local authorities and ministers who used the law to try to silence dissent. We stand with them.

Jonathan Bartley is co-leader of the Green Party.