Activists are gearing up for a fresh wave of protests against fracking. Could it halt the industry for good? 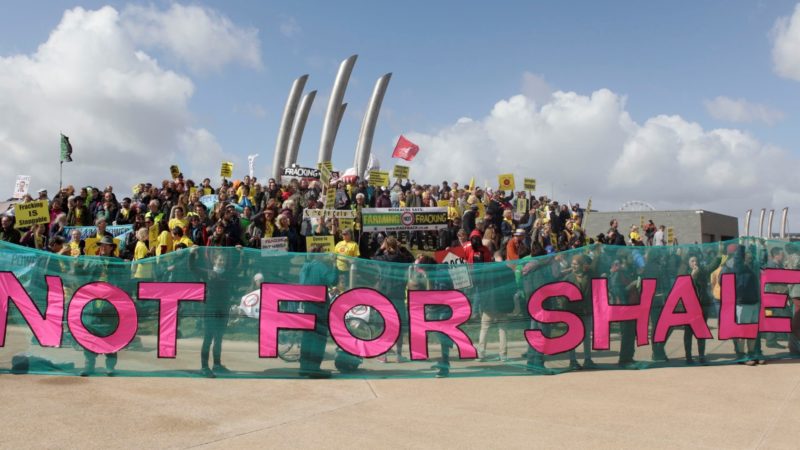 In an alternative universe where the government commands popular support and social justice movements don’t exist, the UK would now have a fracking industry.

It would be extracting gas in Lancashire and North Yorkshire alongside dozens of rigs across the ‘Desolate North’ including in Sherwood Forest and surrounding Sheffield.

Instead, a powerful and growing coalition of anti-fracking organisers have used a diversity of tactics to frustrate the birth of this unwanted industry.

At Cuadrilla’s Preston New Road (PNR) site in Lancashire, fracking is over a year behind schedule. At Third Energy’s site in Ryedale, North Yorkshire, equipment has been removed and work halted until they pass a financial resilience test. Elsewhere, there’s no sign of the hundreds of rigs needed to establish the industry.

Frack Free Lancashire and the Fracking Nanas have been building support locally and using every tool in the box for over 6 years to resist fracking’s imposition. Reclaim the Power (RTP) is a national social, economic and environmental justice network experienced in direct action. RTP has built relationships with local groups and has a long-term commitment to practical solidarity including sharing.

Last summer, RTP was at Preston New Road for the entire month of July, pulling off a disruptive action every single working day. Blockades have included multiple protectors locking themselves into heavily fortified objects in front of the site gate with increasing creativity.

Another popular and effective tactic is to jump on top of lorries transporting equipment into the site (AKA truck surfing). The dual effect of this is stopping access to the site for days at a time and causing haulage companies to agree to stop supplying the fracking industry. Different groups have effectively mobilised hundreds of people at a time to visit the gate forcing movements in and out to stop for the day.

Direct action employed by locals and RTP has been essential as part of a wider strategy. Fracking remains unpopular where it is imposed and nationally because we have built cross-party political support.

Only the Tory party now support developing a fracking industry, with the Greens and Liberal Democrats loudly opposing it. Labour will ban it when they enter government, as in Wales. The SNP have already in Scotland.

Beyond the parties, the anti-fracking movement is diversely composed of faith groups including Quakers and trade unions like PCS and elements of Unison and Unite. Active opposition across civil society has obliterated the fracking industry’s social license.

Most starkly, after years of campaigning for Barclays to stop financing Third Energy, at their 2017 AGM the bank’s Chairman pledged to sell the company and stated they “regret that we made this investment” in May 2018.

To build on this progress, we need bigger disruptions and a bigger movement. RTP’s upcoming Block Around the Clock action will blockade PNR for 48 continuous hours with only the number of people mobilised.

Actions like this growing in scale and duration will continue to slow the industry down in the face of police violence, the Government’s anti-democratic power grabs and the industry’s attempts to repress peaceful protest.

Passive supporters, now is the time to get involved. Even for a one-off mass action, your support will help to hammer the nails in the fracking industry’s coffin before its able to boom.

We will also continue building a movement spanning civil society. We’ll encourage supporters to work through whatever institution they already belong to.

Whether it’s a faith group, university, trade union or other social campaign, leveraging our collective power through public institutions will build a social majority to oppose fracking and take action for a just transition to renewable energy.

Join Reclaim the Power for Block Around the Clock, from 27 June-1 July at Maple Farm, Preston New Road.

Chris Saltmarsh is a member of Reclaim the Power in Oxford.