The Speaker refused to act - yet the SNP MP targeted was removed for 'disorderly' conduct for demanding vote during PMQs today. 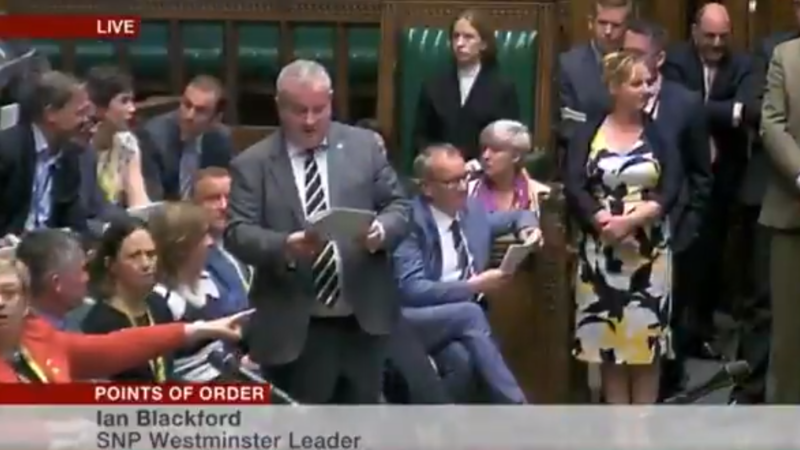 A Tory MP has been referred to the Speaker after allegedly shouting ‘suicide’ when an SNP figure asked what could be done to secure proper debate on the devolution settlement.

Blackford was dramatically removed from PMQs today after seeking an emergency debate on the devolution settlement – taking the entire group of SNP MPs with him.

It has caused anger given that the person who joked about suicide in the Chamber last night was not chastised or removed.

SNP figures were in uproar:

As @IanBlackfordMP raises a point of Order, asking what Scottish MPs can do to ensure proper debate, Tory Ian Liddel Granger shouts “suicide”. This complete contempt is what the Scottish people are up against.

This is the contempt which Westminster feels for Scotland’s Parliament and Scotland’s MPs. Devolution all but ignored in debate and the leader of the 3rd party told to contemplate suicide as an option. @ScotNational #EUWithdrawalBill #BrexitBill #scotlandsplaceineurope #Brexit pic.twitter.com/64SqmenCWL

People have reacted in anger given the SNP’s eviction from Parliament during PMQs:

The speaker is kicking out an SNP MP for demanding a vote be held (which as far as I understand is his right) but didn’t kick out an MP for calling for another to commit suicide during a debate. Bercow ought to be expelled from the chair. #PMQs

“On a point of order, Mr Speaker. When my right hon. Friend Ian Blackford was asking you what options were open to Scottish parliamentarians to raise their concern about what has just occurred today, Mr Liddell-Grainger shouted, “Suicide”. Is that in order, Mr Speaker?”

However, Speaker John Bercow said the remark was ‘distasteful’ but not ‘disorderly’ – meaning the MP would not be sanctioned:

“I did not hear it…If I had heard it, I would not have approved of it…

“For the benefit of people listening to our proceedings…I would judge that, frankly, to be distasteful. Is it disorderly? It is almost certainly not disorderly…but in this context, it is distasteful, and I am sorry that it was used.”

Speaking to this site, a spokesperson for the Speaker confirmed the comments and repeated Mr Bercow’s claim:

“The comments made by Ian Liddell-Grainger MP were, in Parliamentary terms, “in order” and therefore this is more a matter of taste. All Members are responsible for the words they choose to use in the Chamber.”

“We will be picking this up and taking this issue forward…[you] can expect [it] to be raised in the chamber…with either the Speaker or the House authorities this afternoon.”

However, events may have now overtaken the matter…

You can watch the controversy here:

Tory MP (apparently Ian Liddell-Grainger) shouts “Suicide!”, as SNP leader Ian Blackford asks the Speaker what options are available (on devolution and the lack of debate). How is this acceptable behaviour? pic.twitter.com/bl8FR42q1a

Tory MP Ian Liddell-Grainger did not respond to requests for comment.