The pair hope to build on the Greens' recent electoral gains - professionalising the party while pledging 'fierce resistance' to the right. 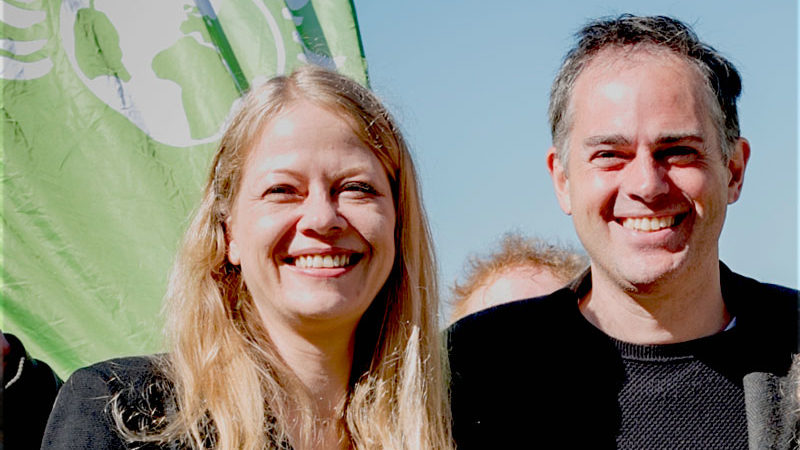 Current co-leader Jonathan Bartley and London Assembly member Sian Berry have announced they are to stand as a job-share for the Green Party leadership.

Bartley has led the party alongside Caroline Lucas since 2016, the same year Berry was elected to the London Assembly.

It follows news on Wednesday that Caroline Lucas is to step down from the leadership role, after presiding over a period of professionalisation for the party.

Both Bartley and Berry are seen as formidable campaigners and spokespeople in the media – and they have just fired the starting gun in a leadership race that will run until the party’s conference in October.

As well as being an Assembly Member (and former ‘Principal Spokesperson’ of the party – before they had leaders), Sian Berry was recently re-elected with an increased majority as a councillor in the London Borough of Camden.

Earlier this month, Jonathan Bartley became the new leader of the opposition on Lambeth Council, securing election on the council after the party gained four seats in May’s elections.

The Bartley-Berry leadership bid is highlighting the need to build on the Greens’ recent success in the council elections – looking towards next year’s locals.

But debate over Brexit is likely to dominate. Bartley has recently spoken at ‘Stop Brexit’ rallies, and has made a ‘People’s Vote’ on the EU deal a key part of work alongside Caroline Lucas.

The duo will also be focusing on ‘meaningful action on air pollution, a fairer voting system where no vote goes to waste, and better work-life balance nationally with a shorter working week’.

“This is about building on what we’ve achieved and taking the party to the next level. The last two years have been the toughest two for the party – with the polarisation of politics, the EU referendum and the snap General Election…

“Despite this we’ve come out, with membership held and a 17% gain in our councillor numbers. The party has become so much more professional, expanding field organisers and ‘Target to Win’ [the Greens’ election targeting programme]…

“And we’ve seen breakthroughs onto a whole bunch of new councils – getting our foot in door, building on this and defending gains – alongside vigorous campaigning, from opposing tree felling in Sheffield to fracking, and where necessary, taking non-violent direct action.”

Bartley says the party will lead ‘fierce resistance’ to austerity and environmental damage. “This is something that’s unique to the greens – professionalism alongside being prepared to put our bodies in the way,” he told LFF.

“There is a clampdown on civil liberties happening from central government now which is being implemented by councils.”

He recognised that the party has ‘a long way to go in representing modern Britain’. But Bartley – who cares for his disabled son – argues the ‘job sharing’ model has helped this in the party on this front. “Two years later we’ve won the argument on job sharing.”

The co-leader told LFF he would like to develop a ‘greater sense of a leadership team – one of concerns is that having a job share for leaders prevents a job share being possible for deputy’ because there is not the funding available for both.

A ‘holistic review’ on improving the party’s structures may lead to a ‘shadow cabinet’ for the party, with the review expected to reports to party conference in the autumn.

In a statement, Sian Berry said:

“I know that Caroline will be a hard act to follow but I’m ready for the challenge. We have the most organised and talented set of people in this party that I’ve ever seen, and hard-working local parties everywhere getting people elected.

“It will be my job to make sure they get the best leadership and policies to talk about on the doorstep, and to grow the practical support and training they get from the party too.”

The candidates announced their entry into the race with a launch video:

And there are rumours current deputy leader Amelia Womack will stand, with the potential candidate sharing Ladbrokes odds – which had her as favourite – on Twitter yesterday:

At time of writing, the odds have been suspended after Bartley and Berry entered the race. Watch this space…