The PM is reported to be effectively ignoring the Foreign Secretary's Brexit proposals - raising the stakes as to whether he'll jump or be pushed... 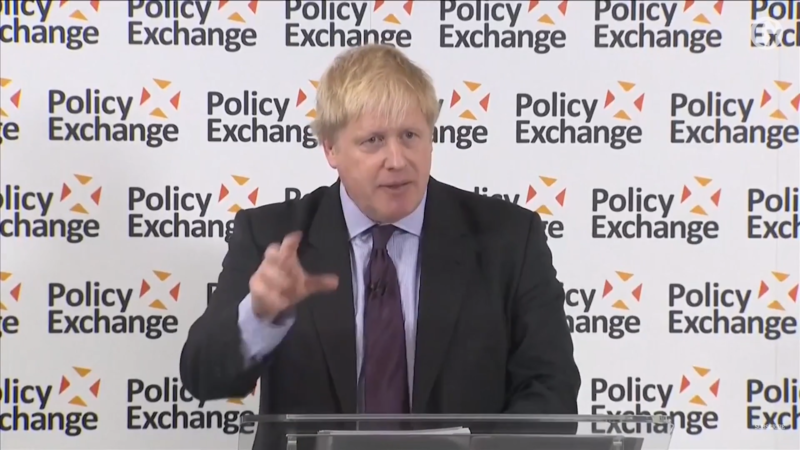 The clock is ticking on Brexit, and with a Cabinet at war, it seems the PM is trying to exert some authority.

Earlier this week we heard of Boris Johnson’s ‘f**k business’ outburst, following news that Airbus may cease UK operations after Britain leaves the EU. Now, we are finally getting hints that the blond buffoon is being sidelined.

Amid frontbench splits that make tectonic ridges look tiny, revelations by Channel 4 show just how short on time Theresa May is, with no deal in sight:

“After the European Council next week and factoring in Brussels summer holidays, there are now only “six weeks left” of negotiating time before the October summit at which negotiations are meant to be concluded. Ministers at [a recent] briefing came away with a real sense that “time is running out.”

As Peter Mandelson points out in a Times op ed, with 274 days to go before we officially leave, “we do not even have an outline political agreement of what our future relationship with the EU will be.”

That raises the prospect of border checks and tariffs, something all sides are keen to avoid. Indeed, the PM has pledged ‘no hard border’ in Northern Ireland.

With so little time left, a number of options are being put on the table. Crucially though, this isn’t being led by Cabinet’s Brexit sub-committee – which contains a certain B. Johnson. It is being led by the UK chief Brexit negotiator Olly Robbins.

They include some recommendations the Foreign Secretary is likely to despise, but which stand the best chance of success (that being a relative term).

As Channel 4’s Gary Gibson reports, Olly Robbins is putting forward ‘a series of approaches ranging from a Norway-style rule-taking approach to those with more sovereignty but less access to EU markets.’

“There’s bound to be suspicion that only one of these approaches – the one outlining what is effectively a Norway style approach with the UK in the single market for manufactured goods and agricultural goods – is the one the EU27 would be most likely to engage with.

“The other more distant relationships to EU institutions proposed may be approved as negotiating lines to pursue but might be political window dressing for internal consumption and could die a very early death at the Brussels negotiating table.”

So Boris Johnson’s proposals – for ‘maximum facilitation‘ of goods (via a totally untested electronic border checking system) may be on the table, but not as a serious proposal. Partly because it would still necessitate a hard border in Ireland.

On the other hand, Theresa May’s preferred option – a ‘customs partnership‘ – would see the UK collecting tariffs on behalf of the EU, for any goods coming here that were destined for EU states. The UK would become a sort of ‘clearing house’, with businesses claiming back any tariff rebates from the government if the goods then stayed in the UK. It would, in theory, smooth out the movement of goods between Britain and the EU.

Either way, pressure is mounting for the PM to either sack Johnson – or for him to walk.