The ex-EDL leader went down for prejudicing the British judicial system - not for upholding 'free speech'. 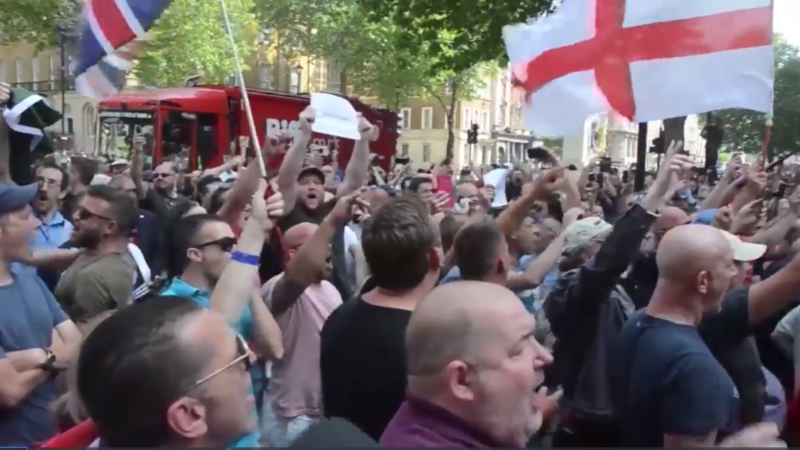 Pic: A recent ‘Free Tommy’ rally – in which some can be seen raising Nazi salutes.

This week I made a joke along the lines of: “To anyone expressing their support for ex-EDL leader Tommy Robinson – I’d like to take this unique opportunity to invite you all to take a long walk off a short pier…”

It was obviously tongue-in-cheek, but nonetheless, I’ve taken a moment to reflect on whether the sentiment behind the comment was unfair.

That moment is over – it wasn’t. Here’s why.

Frankly, Tommy Robinson is a bigoted, xenophobic, racial-hatred inciting neo-Nazi, and it’s a shame it’s taken this long for him to end up behind bars. The end? Tempting, but there’s a deeper message here.

To be clear, Robinson is not being jailed for inciting racial hatred (sadly), but for live-streaming from a long-running criminal court case. He stood accused of contempt of court for prejudicing the principle – and practice – of a fair trial. He pled guilty.

Now, I must confess – I only got a 2:2 in my ‘Introduction to Law’ module at Uni, but I’m relatively confident that when you plead guilty to a crime, sentencing generally tends to follow.

Hearing this contemptible figure be labelled a ‘citizen journalist’ has been depressing, as has the groundswell of support for his release, the conspiracy theories surrounding his plea, and the artistic imagery of Sadiq Khan placing a noose around Robinson’s neck, and free speech itself.

This is always the danger when prosecuting a bigoted charlatan with a misguided following – you risk making a martyr of him. Regardless, he’s pled guilty to a crime, and is the last person to deserve special treatment from the judicial system.

But what we’re seeing now is people disguising the racism that motivates their defence of Robinson and their wince-inducing ‘#JusticeForTommy’ tweets with a valiant and noble defence of free speech.

Yet if free speech is a fundamental pillar of a free and fair democracy, so is the right to a fair trial by one’s peers.

Either you support every pillar of democracy or not. If not, fine, but don’t brandish yourself a crusading defender of democracy whilst being selective in which of its principles – that you reckon justify your own racist views – you choose to back.

If you care so deeply about the principle of free speech, then you should know it is not an absolute freedom: it has rightful limits. Ones which exist to protect ethnic minorities, the LGBT+ community and other persecuted groups from the incitement of hate crimes. If you overstep those limits, you deserve to face the consequences.

Robinson’s rabid supporters don’t seem to mind that principle being enforced against radical Islamist clerics, but are conveniently forgetful or disdainful of it when it applies to white, British men.

To anyone who wants to defend Tommy Robinson, that’s your right. You’re wrong, and I’d rather walk slowly and purposefully into oncoming traffic than have a pint with you – but it’s your right to be wrong.

What I take particular issue with is lying about why you defend him.

Just admit it: you defend Tommy Robinson because you share his ignorant, repugnant and downright racist opinions.

You’d still be a racist, but at least you’d be an honest racist – and it would give an even clearer signal to the rest of society that we ought to give you a several mile-wide berth if we ever have the displeasure of coming across you.

Nathan Phillips was South East Coordinator for both of Jeremy Corbyn’s Labour leadership campaigns, and currently works for a Labour MP.