People power can and will overcome the bullying and intimidation of the Mail, writes Best for Britain's Eloise Todd. 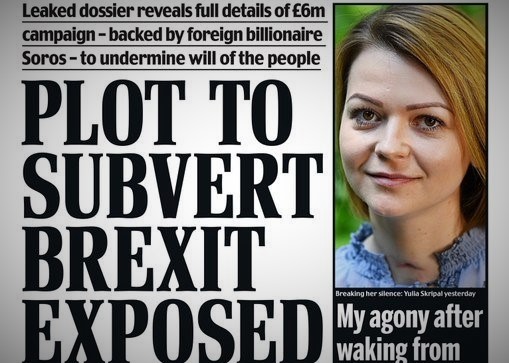 The paper seems to believe we are a secret group, although we send them press releases about ten times a day.

Our super-secret document said the following:

“Best for Britain will claim leaving the EU will put national security at risk…will blame Brexit for funding cuts at local councils, NHS and public services, and will also claim Leave voters were rejecting Westminster and not Brussels.”

They also say we need to raise more than £3m to win this fight – again true. That’s why off the back of Paul Dacre’s generous free advertising launched a crowdfunder that raised nearly £10,000 in its first hour  – please chip in to help us get the funds we need to win.

On a serious note, crowdfunding has been the biggest single source of donations to our campaign since we began. Small donations of £5, £10 and £20 from concerned citizens across the country have provided most of the fuel for our campaign tank. We are proud of this, and grateful to the people from all walks of life who are donating their hard-earned cash to our campaign.

What the Daily Mail are trying to do is warn people off the Brexit fight. The last time I checked Britain was still a democracy. There is nothing unusual about groups speaking out to fight for what they believe in. The Daily Mail would have us think differently – ‘the people have spoken’ they say – ignoring the monthly polls that show a steady increase in those that want to abandon Brexit.

So the Daily Mail front page is a warning: to us not to speak out, to wealthy individuals or organisations not to donate, and to politicians to not dare question the march towards Brexit, no matter how people in the country are feeling about it. That’s not right, and we’ll keep on fighting for our right to speak up.

The paper also say that we are working hard to try and convince the Labour leadership to keep all options on the table, including staying in the EU. Again, they are right – we want the Party to change tack. We think that the now-majority of the country that regret Brexit need to see full opposition to the government’s plans.

Stopping Brexit democratically is our sole mission – the people of the UK deserve a choice between Brexit and the membership deal we currently have. That’s why we’re fighting for a people’s vote with an option to stay and lead in Europe.

We have raised cash and then we use it to try and make a difference. In recent months we have invested in partner organisations such as Our Future, Our Choice, constituency by constituency research, campaign barnstorms and our billboard campaign. In early April our polling showed an increase in support for a people’s vote.

So, sign up, donate if you can, and let’s show this country that people power can overcome the bullying and intimidation of the Daily Mail – please do all you can to help us stop Brexit.

Eloise Todd is Chief Executive of Best for Britain.