From Blackpool to Yorkshire, protests are showing this can be the year we kill off the idea of fracking in England. 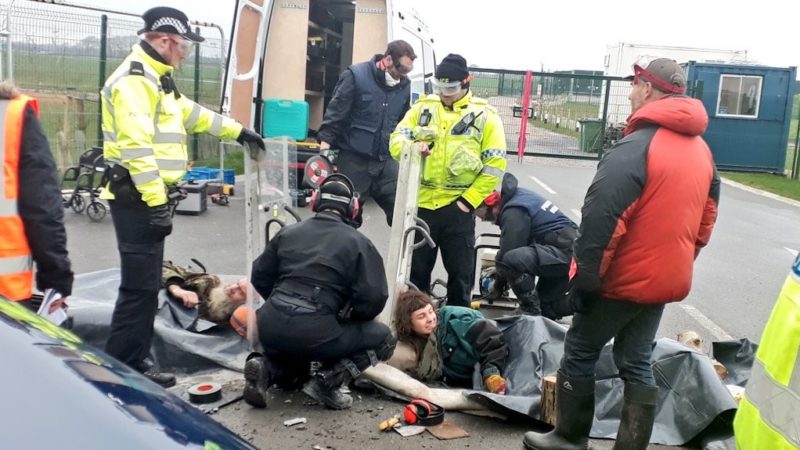 There are many different ways to join the battle to stop fracking in England – and this week I’ve experienced the full range close up: from lock-ons, to rallies, from legal submissions, to silence.

It started on Monday morning, with the re-opened inquiry into Cuadrilla’s plans to frack at Roseacre Wood (near Blackpool), which was marked by an impressively large and diverse rally outside.

Speakers from threatened sites in Yorkshire and the Midlands brought their solidarity with the Lancashire anti-fracking campaign, including the famous Misson owl mascot – marking the close proximity of a proposed Nottinghamshire site to a SSSI – and nine year old Sophie, making her first speech to express her concern about the need to protect our fragile Earth.

Inside, at the start of a 10-day hearing of detailed discussion about highway movements, another form of the struggle against fracking was taking place – with the legal representative for the Roseacre Awareness Group explaining how Cuadrilla was now going back to plans it had itself originally abandoned as unsuitable, after its original traffic proposals were rejected. Behind his words were many hours of voluntary labour in data collection and analysis.

Just a few miles away at Preston New Road – the one site where a fracking well has been completed – another form of protest was having an impact.

Four protectors had “locked on” to fiendishly complicated systems of pipes embedded in concrete blocks, preventing access to the site. To evade security, they’d got in position at 2.30am – two were still there at 4pm in the afternoon.

I got there about 2pm, and was pleased to be able to provide welfare support to them for their last couple of very long hours – as they resisted pain and cold, with police angle-grinders cutting inches from their face. Truly valiant work.

But of course not everyone can do that. The next morning I was back for a very different form of protest, joining the regular “White Wednesday”, when women sing, dance, and hold a 15-minute silence to mark their resistance.

Meanwhile, back in Yorkshire, at Kirby Misperton, protectors were celebrating the reopening of a footpath closed for the convenience of would-be fracker Third Energy, driven off by the force of protest against it – and the government’s concerns about its financial resilience.

It was a reminder that this hasn’t been a good few months for fracking.

Several planning applications have been rejected. Public support for the technology is in freefall, while a new academic study has concluded Scotland’s consideration of the issue, which led to it blocking fracking, was world-leading. “The UK case for fracking is based entirely on outdated reports and arguments,” the report notes.

The frackers at Preston New Road might have hoped that their completion of the well would have disheartened campaigners, but it is clear that instead they’ve become even more determined.

A new umbrella group, United Resistance, has planned continuous weeks of action right up until the end of June. I’m already planning my next visit for June, for Green Party Week,  and Reclaim the Power week at the end of that month is promising to be huge.

With renewable energy racing onwards, and the focus of most of the rest of the world’s energy policies, there’s good reason for that focused effort.

But my visit to Preston New Road raised one final question – still outstanding from my last visit there: where’s Jeremy Corbyn? Protectors were disappointed that he still hasn’t visited the site, and asked me to ask the question again.

With or without him, this can be the year when we kill off any idea of fracking in England – joining Wales, Scotland, France, Germany, Bulgaria, the US states of Maryland and New York, in banning fracking.