Past interventions in Yemen and Palestine have taught us that the Syrian strike is unlikely to be about (nor successful in) protecting defenceless civilians. 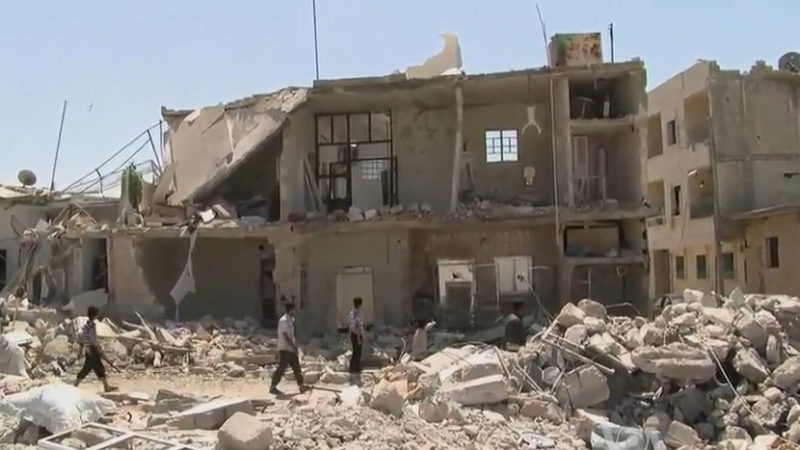 In racing to fall in line with Trump and have the US President’s Foreign Policy agenda dictate our own, the UK Government bypassed Parliamentary scrutiny to join the war in Syria.

The claim is that the round of ‘gesture bombing’ timed to avoid national and international scrutiny and approval aimed to protect innocent lives. However, the most likely outcome is that more innocent lives have been endangered by a knee-jerk bombing campaign, devoid of any wider strategy.

Not only that, the desire to protect innocent lives against war crimes and human rights abuses in the Middle East appears to be inconsistent with the Conservative Government’s other policies in the region.

Innocent lives are being lost in huge numbers in Yemen, victims of Saudi Arabia war crimes. However, Ministers continue to proudly sell arms to the perpetrators and give Saudi dignitaries the full red-carpet treatment.

And as we edge closer to Nakba Day, violence in Israel and the occupied Palestinian territories increases; with the loss of innocent lives. And the Government is silent.

On the plight of Palestinian citizens as on the bombing of Syria without international legal approval, the UK and US coalition are becoming increasingly isolated.

International agencies, like the UN, have not been as hesitant as the UK in condemning the actions of Israeli state forces and the Government’s refusal to “credibly investigate and prosecute substantial allegations of wrongful killings by its security forces.”

And thanks to the Greens in the European Parliament, a motion for a resolution, which I helped draft, will be voted on today condemning the “grossly disproportionate use of force by Israeli security forces against unarmed Palestinian demonstrators in the Gaza Strip” and expressing the EU’s “solidarity with the victims and their relatives.”

Nakba means ‘catastrophe’ in Arabic. The Day, 15 May 2018, commemorates the displacement of 750,000 Palestinians that preceded and followed the UK and UN-backed Israeli Declaration of Independence in 1948.

This year marks the 70th anniversary of the Nakba; more than 50 years of illegal occupation and 11 years of an illegal blockade against Gaza.

It is also the 42nd anniversary of Land Day. The Day marks one of the most significant united Palestinian demonstrations against the Israeli state’s plans to seize their land; six unarmed Palestinians were killed.

The first Great March of Return demonstration, which demands the right of return for Palestinian refugees and their descendants to villages and lands taken from them by the Israeli state, was attended by more than 30,000 Palestinian civilians. Since the protests began on 30 March, Israeli Defence Force snipers have killed 31 and injured more than a thousand unarmed protesters; six journalists are also among the murdered.

Yasser Murtaja was a journalist covering the protest; he was shot while wearing a clearly-marked press jacket.

Murjata was a Gazan resident, who was born during the first intifada, lived through the second, and was one of many Gazans subjected to three deadly conflicts and the impacts of an 11-year illegal blockade. He had never travelled outside of Gaza.

Israel has claimed that they do not shoot journalists. However, the IDF has bragged that the protests provided an opportunity to test both their military expertise and precision and new drone weaponry. The number of innocent Gazan lives lost, therefore, suggests the IDF deliberately targeted and killed unarmed protesters and journalists.

Palestinians are in mourning but have called for the protests to continue until Nakba Day. While Hamas has supported the call, the claims of the Israeli Defence Minister, Avigdor Lieberman, that ‘there are no innocent people in Gaza only Hamas militants’ are, at best, pure fantasy and, at worst, pure propaganda.

The protesters are Palestinian citizens who have lived, as their parents and grandparents before them, under a brutal and oppressive occupation; as second-class citizens in their own home.

The idea that all Gazans are Hamas activists is patently absurd and symptomatic of the disregard the Israeli state has for the rights of Palestinian people.

The right of return for refugees is enshrined in international humanitarian law, and included in conventions that Israel itself has ratified. It is a right, however, denied to Gazans; one of the many human rights abuses suffered by Palestinians.

For decades, Palestinians under an illegal occupation have been collectively punished for demanding the simple right to freedom, justice, and dignity in their homeland.

The British Government played an active role in the Nakba and continues to be silently complicit in the abuses of the Israeli state it birthed. It is difficult to believe, therefore, that ‘protecting innocent lives in the Middle East’ is the reason for the Conservatives’ desperation to fall in line with Trump’s foreign policy agenda.