Stagnating wages and Tory austerity have forced millions of working families into poverty. 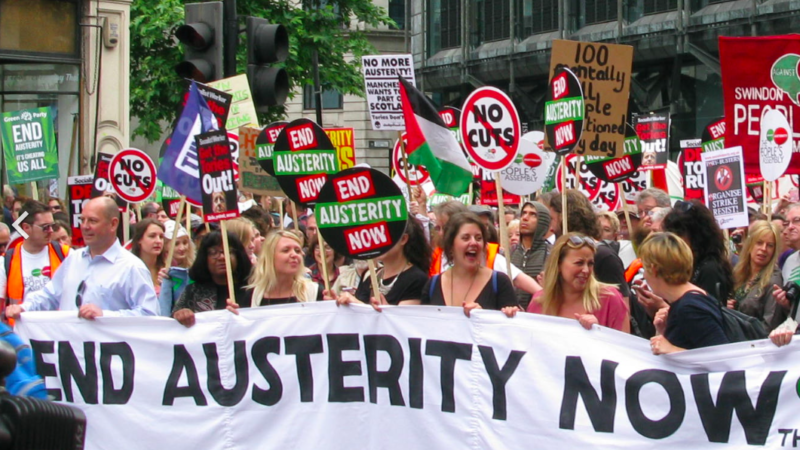 Tory austerity policies and an unbalanced economy are locking millions of households into poverty, and work is no longer a route out, a new study from the Institute for Fiscal studies set out today.

In-work poverty has grown by 35 per cent in the past twenty years and now over half of people in poverty (57 per cent) are children or working-age adults living in a household where someone is in paid work.

A total of 14 million people in the UK currently live in poverty – more than one in five of the population – the Joseph Rowntree Foundation estimated last year.

Work isn’t paying for millions in the UK because wage growth has been poor since the early 2000s and non existent since the 2009 financial crisis, the study says.

And wealth re-distribution by the state, much in the form of tax credits, since the mid 1990s had kept many households out of poverty – but these benefits are now being cut back.

The study by the IFS found that:

Theresa May tweeted a month ago: “more people are getting into work, able to provide for their families and build a better future for themselves and their children” – nothing rings more hollow in light of today’s figures.

The Tories can say all they like about unemployment being down, but what use is this if the work isn’t paying enough to raise families out of poverty.

“The low pay economy is locking people in poverty.  For too many people, work is not providing a route out of poverty: many families are struggling to make ends meet despite having a job.

“Our productivity slump means that average wages have barely grown since the recession, trapping more workers in poverty and leaving them unable to build a better life. This is not acceptable.

“If we want to solve the challenge of in-work poverty, we need to make sure our industrial strategy addresses productivity in hospitality and retail – industries in which many people are low-paid – not just high-tech firms.

“People in low-paid jobs need to get the support and training they need to make progress in work, and part-time workers need to have as much opportunity as full-time workers to progress, so that they can break free from the restrictions the low pay economy places on them.”

“Working parents shouldn’t have to worry about feeding or clothing their kids. But after years of low pay and in-work benefit cuts, many are struggling to afford even the basics.