Lecturers' strikes brought universities to a halt for most of the last month. But what started as a last resort turned into a movement for the Free University. 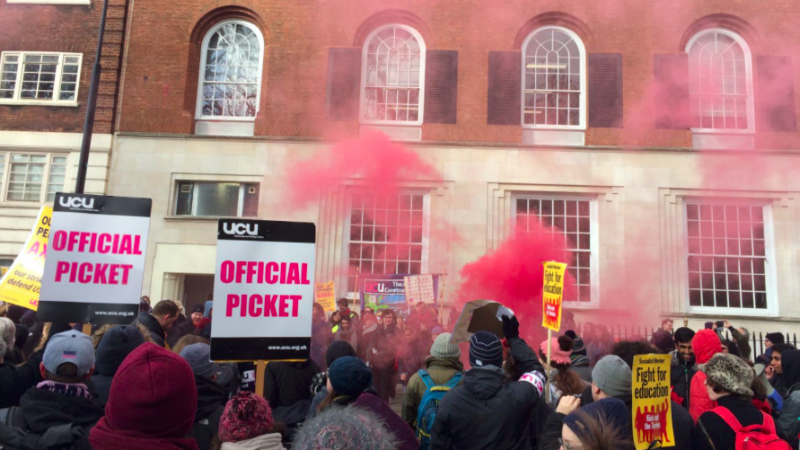 On February 22nd the University and College Union (UCU) called for the beginning of a nation wide strike in response to Universities UK’s (UUK) attempt to shift of the Universities Superannuation Scheme from a defined benefit pension to a defined contribution pension.

In lay terms, this would result in a typical academic staff member having their pension reduced from around £20,000 a year to around £13,000 a year. Women and younger members of staff would be disadvantaged the most by the change. This has been seen as yet another attempt to push the logic of the markets into higher education. The lecturers’ union, as expected, took issue with the move.

And then something happened… The picket line not only demarcated the final straw of lecturers’ anger over marketisation in higher education, it also constructed space and time in which lecturers and students began to rediscover each other. All over the country. From teach outs, meetings, and simple acts of care, such as the giving and receiving of tea, the dream of the Free University began to reemerge.

Let’s think of cultural theorist Mark Fisher’s concept of late capitalism’s most vicious weapon as “the slow cancellation of the future.”

UUK’s move proves a perfect example of this ability the system has to close down horizons of possibility. In this case, the future of higher education and academic teaching. So too do the strikes illustrate the antidote. Or, as Fisher suggested, the process is disrupted by way of revealing self evident truths that undermine capitalist logic.

What I saw on the picket was the formation, if only brief, of what the psychologist Jay Watts refers to as a radical community of care. People, once given the time, began to talk to each other, discovered for the first time comrades within their university and union, and found solidarity reflected.

Evidence of this connection can be seen in the events of March 13th:

UUK and UCU reached a deal through the arbitration service ACAS late on Monday, to be voted on the following day. In a single evening a mass resistance to the deal took off, with #NoCapitulation trending on Twitter, and 10,000 signing a petition against it. Union members and their supporters weren’t going to sit back and let union top brass betray what had developed on the picket. The hastily called protest outside UCU’s HQ was noisey, large, and not all that peaceful, with a flash occupation of the lobby at one point. It was clear this was no longer just about saving pensions, but fighting for them.

The almost unanimous rejection of the deal by local branches, and subsequently UCU, shows that for now the rank and file are in control, and they’re up for it.

But what now that the 14 days of strike action are over? How does the energy continue?

The strike goes on, with lecturers now engaging in “action short of a strike”, waiting to hear when the next strike days will be called.

At a Strike! National Activist Meeting hosted by Goldsmiths UCU, the conversation was no longer just about pensions. This has become a launch pad from which to call for the democratisation and restructuring of higher education through documents such as the Gold Paper and Jacob Bard-Rosenberg’s demands.

It has become about the reimaging of what the University can be for its local community. About how we can close the black and minority ethnic attainment gap, and break the structural racism of our institutions. About how we can unionise together and connect our struggles in solidarity from porters to professors. Rooting out precarity in every guise, and linking up with the Independent Workers’ Union of Great Britain (IWGB) planned strikes for outsourced staff on April 25th and 26th.

What started as a last resort is becoming a movement.

Victory will not be easy, but day by day the corrupt measurements upon which the unsustainability of the Universities Superannuation Scheme was based is being revealed. A win here will not be the end, the momentum has shifted. We are learning that defence is no longer an option, that the fight must be taken to UUK and the government.

It is not enough to protect what we have, it’s time to stake a claim to the future.

George Briley is an anthropology student at Golsmiths, University of London. He’s a member of the New School Economics Goldsmiths.