Cleaners, receptionists and other university admin workers are demanding to be brought in-house at the University of London. 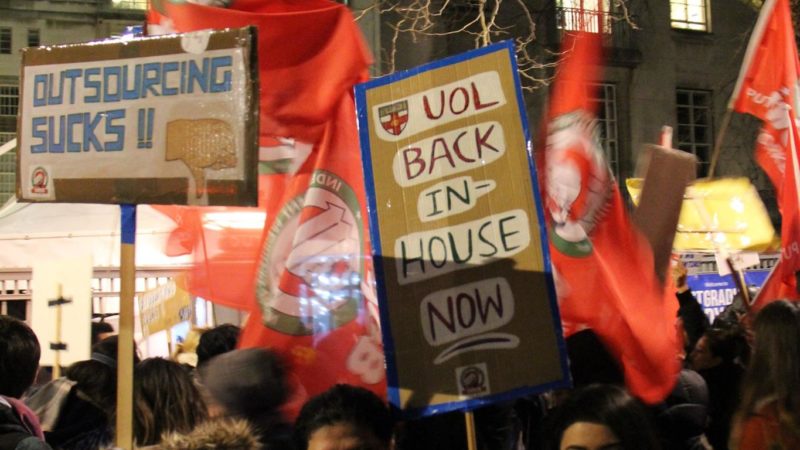 Over 100 members of staff are to go on strike on 25 and 26 April in what is set to be the largest industrial action taken by outsourced workers in British universities.

The University of London (UoL) workers are currently employed by several outsourcing companies, often on zero-hours contracts. They also benefit from much smaller pensions, holiday packages, sick and maternity pay packages than their colleagues employed directly by the university.

Workers organised through the Independent Workers Union of Great Britain (IWGB) voted nearly unanimously to go on strike at the end of April, demanding in-house contracts and a rise in pay.

“The university has done its best to deny workers like me basic rights and we have had to fight for everything, from the London Living Wage to basic sick pay. All we ask for is equality and we will keep on fighting until we get it.”

The industrial action is part of the “Back In-House” campaign, launched last year by the IWGB and supported by Shadow Chancellor John McDonnell MP and Green Party co-leader Jonathan Bartley. Several student unions are also backing the campaign.

In a video message recorded last December, McDonnell urged the university to “end the two-tier contract, the two-tier workforce.”

White UoL administration was previously forced to initiate a review of its facilities management contracts with groups such as  Cordant Security and Nurture, it has since denied the outsourced workers’ input.

“The University of London has revealed the absolute contempt that it has for the workers that keep it running day after day by ignoring their repeated calls to be brought in-house. We will not stop until all workers are made direct employees with equal terms and conditions as in-house staff.”

The IWGB is the largest union at UoL’s central administration buildings, like Connaught Hall and the infamous Senate House.

The picket lines will include cleaners, security officers, gardeners, receptionists, porters, as well as postroom and audiovisual staff.