Members are not happy with the journalist's call for Caroline Lucas' party to call it a day. 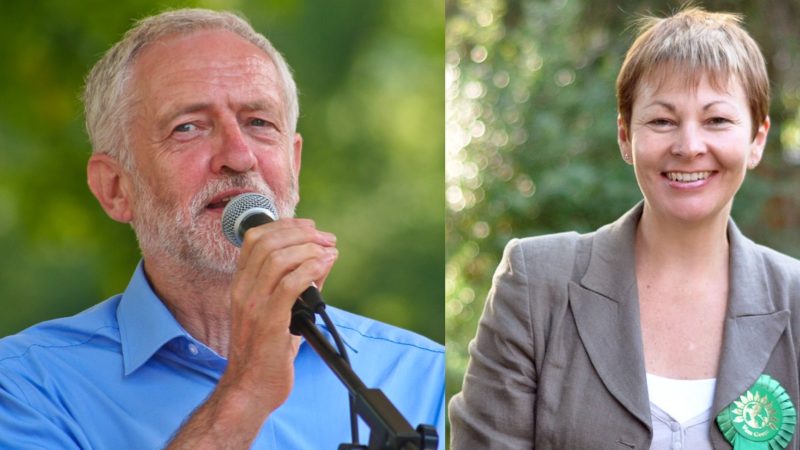 “This proposal will undoubtedly go down like a cup of cold sick for activists on both sides of the divide,” notes Owen Jones at end of a heartfelt call yesterday for Labour and the Greens to do the unthinkable: join forces.

He’s right about one thing: the proposals have not gone down well – at least in the Greens.

Jones presents an impassioned case that many instinctively sympathise with. Few want the left to be divided. Few want like-minded parties to ‘split’ each others’ votes. And few deny that the overarching aims of the Greens and Labour are now broadly aligned.

He argues that the Greens’ separateness doesn’t serve their causes well – not least given the party’s slump in recent elections, and the lack of a clear distinction between the parties’ policies in a context of Corbynism:

“A red-green alliance is surely overdue. Although Labour currently presents a radical offer on climate change, such a pact would amplify the measures needed to stave off what is, after all, an existential threat to humanity.

“The Greens suggest that being separate from Labour maximises their leverage over the party to be more radical. I’m not so sure: it leaves them with a single MP and unable to politically advance. Allied to Labour, they could present themselves as one of a governing party’s radical flanks, and get candidates selected with their politics…

“This could be the makings of a formidable political alliance to defeat Toryism and form a government to both eradicate social injustice and help save the planet. And surely that prize makes the pain of overcoming partisan differences worthwhile.”

But Greens are not happy. Many view Labour’s policies on everything from nuclear weapons/power to electoral reform and polluting industries as being way out of step with the Greens’ vision of society.

“Rather than pander to this corrupt system by suggesting the Green Party nail their colours to the Labour mast, Owen Jones should be campaigning instead for Labour to embrace electoral reform so that every vote counts.

“I know from my experience as an MEP that pluralistic politics is good for democracy. Proportional representation leads to less confrontational and more cooperative and consensus style politics. Crucially it means people who vote Green – and want to vote Green – actually get Green, not Labour.”

Young Green Party executive member Nate Higgins will formally call for the party to reject any plans for a merger – highlighting in particular local Labour councils’ behaviour, Labour’s rejection of proportional representation and a difference in political/democratic cultures between the parties: “I have always been supportive of cooperation with the Labour Party, and I was one of the early proponents of the progressive alliance. What I am not in favour of is a move that will end both our influence and our unique identity, just to get a few extra ‘Labour Green’ MPs that won’t mean anything for the furthering of Green ideals.

“Labour is not an environmental party, and the Greens need to continue to push them in that direction, and we will. But that is easier to do as two separate parties. If Labour want to cooperate with us, they should adopt Proportional Representation so that we can support Labour in the same way the New Zealand Greens support their country’s Labor party.”

Responses to the article from Greens on social media have been overwhelmingly hostile – with many pointing to the lack of a clear difference between Labour and the Co-Operative Party, a model Jones draws comparisons to:

“Look at your local labour party. Ours is a bunch of unreconstituted road-builders and airport expanders.”

Another wrote: “Two questions. Can anyone tell me a single policy that is is distinctively Co-Operative Party? I won’t ask for one they hold alone but one that came from there first before being adopted by Labour. Second who is the leader of the Co-Operative Party?”

Others note Labour’s support for economic growth – and a risk that Labour might ‘go right-wing again’:

“What do we then do if and when Labour return to their recent neoliberal, Tory-lite leadership? Our logo is, after all, the perfect shape for a yoyo. No, we continue to challenge in local elections and to pose a threat when Labour fail to act on environmental issues. Fossil fuel industry’s unions hold power over them but not over us.”

Another added: “It’s not just the green policies to fight with them over, labour is fundamentally a party of economic growth a paradigm that is dying or nearly dead, there solutions will create more poverty and inequality not less.”

Others were just out-right shocked:

“Does [Owen Jones] not realise how it sounds for a member of one party to tell an opposing party they basically shouldn’t exist?”

Another: “With climate change, Brexit and an unwillingness to reinvent how the UK and global economy the UK needs the Green Party more than ever.”

It looks like the suggestion for a Labour-Green merger is not going anywhere soon – not if Green members have anything to do with it, anyway.