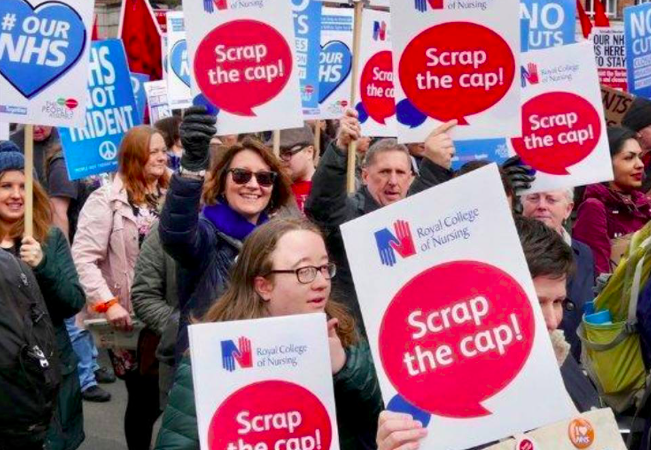 Public sector workers shouldn’t have to worry about feeding or clothing their families. That’s a pretty straightforward principle we can all get behind.

But new TUC research, released today, shows that one in seven children with a parent in the public sector will be living in poverty by the end of this financial year.

This problem isn’t restricted to the public sector. In-work poverty is soaring right across the economy. But there’s something especially galling about today’s figures, given the work public servants are doing to hold our services and communities together.

Through tragedies like those at London Bridge, Manchester Arena and Grenfell Tower, public sector workers went way above and beyond, to save as many lives as possible.

And with our public services on the brink of collapse after nearly a decade of cuts, the goodwill and dedication of staff is all that’s keeping the show on the road. For example, the TUC recently found that NHS staff are putting in £1.6bn worth of overtime every year.

It’s sickening to think of exhausted public sector workers going home after extra-long shifts, worrying about how to put dinner on the table.

Families where both parents work in the public sector are the biggest losers from years of pay restrictions and benefit changes. Their average household income will be down by about £83 a week in real terms by April 2018.

Households with one parent in the public sector and one in the private sector will be down an average of £53.

As usual, the government will point to its changes to income tax thresholds and increases to the National Minimum Wage. But this is no defence. Our analysis takes those measures into account and finds that pay restraint and benefit cuts are trumping any other measure being taken for lower paid workers.

We desperately need a change of direction, and words in budget statements aren’t enough. The Chancellor can claim that the public sector pay cap no longer applies, but that claim means nothing if he doesn’t put funds behind it.

Government departments starved of cash after a decade of austerity can’t be expected to pay higher wages out of existing budgets without having to find cuts elsewhere.

Late last year, research by IPPR showed that a five per cent across the board award for public sector workers would have a headline cost of £12bn over the next two years.

Not to mention the huge efficiency gains we would make by reversing the alarmingly high turnover of staff in our schools, hospitals and other key public services.

But achieving this will require a change of mindset at the Treasury. They must recognise boosting public sector pay as an investment in dedicated and professional staff, and understand the real benefits a pay rise will have for our economy in the long run.

And then they must provide new funding, allowing employers and unions to deliver the pay increases our public servants and services desperately need.

This week is HeartUnions week, a chance to highlight all the great work unions and reps do, and to advance our major campaign priorities. To learn more and take action, visit our HeartUnions hompage.

Frances O’Grady is General Secretary of the Trade Union Congress and tweets here.