Campaigners have slammed the decision as a dangerous attack on free speech. Is peaceful protest against frackers being shut down in the UK? 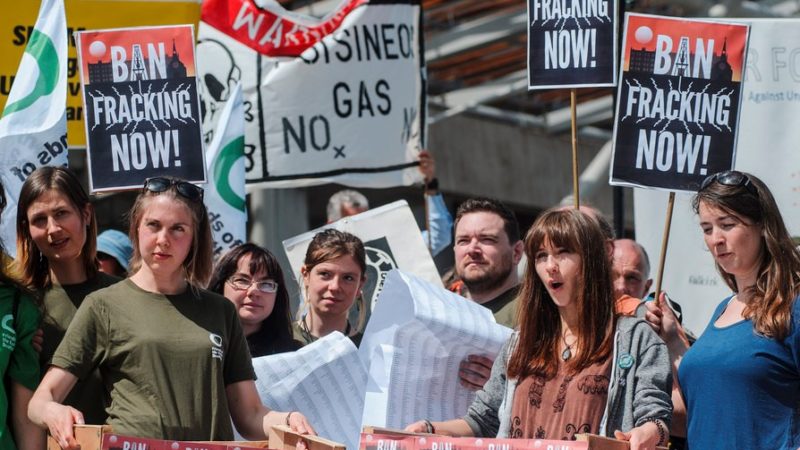 A court injunction banning all protest by anti-fracking campaigners against shale firm INEOS has just been extended.

On Thursday, a High Court judge said the UK-wide ban on civil disobedience against the company could continue.

It means anyone who tries to obstruct the firm’s fracking activities risks being jailed, fined, or having their assets seized.

But the company lost a key part of their case, which sought to maintain a ban on ‘harassment’ – something that was deemed too sweeping and vague.

Campaigners have reacted furiously to the decision to extend the protest ban.

Rosa Curling, of Leigh Day, which represented some of the campaigners, said it was an attack on the right to protest:

“Free speech is at the heart of any democracy. This case is about the right to protest, a right which has always been, and must continue to be, a fundamental aspect of peaceful political action in our society.

“Without the right to protest effectively, the ability of citizens to peacefully challenge injustices will be severely curtailed.”

“This ruling places the right to protest under threat. INEOS have won a technical battle but they are on the wrong side of history, and will not win the war.

“I have visited fracking sites across the country. I have seen the commitment, the energy, and the passion of those who know that fracking is bad for their communities and their country. Their opposition to fracking will never be silenced and the campaign for a future that’s clean and green will win out in the end.”

The ruling bans: “Trespass on INEOS’ land, interference with the activities of INEOS and its contractors, unlawful and unreasonable obstruction of the highway by actions including slow walking, climbing on vehicles, and lock-on protests or a combination of them.”

But Joe Corre, challenging the decision, is optimistic it is slowly being overturned:

“INEOS wanted to criminalise legitimate protest including imprisonment and unlimited financial penalties for anyone who made negative comments about them or their supply chain on social media or any other form of communication. That has completely gone, and rightly so.

“The first time, INEOS lost about 10% of what they asked for in their initial 2,000-page injunction. This time around, a much larger chunk has been chopped away.

“The judge has removed [mention of harassment] from the injunction completely…Telling someone who is trying to destroy your environment that you don’t like it is not harassment.”

There will have to be a full trial for the injunction to be made permanent – and campaigners look set to appeal yesterday’s decision. All power to them.