With air pollution a factor in almost 40,000 UK deaths per year and 44 cities breaching air quality guidelines, we need a new Clean Air Act fit for the 21st century. 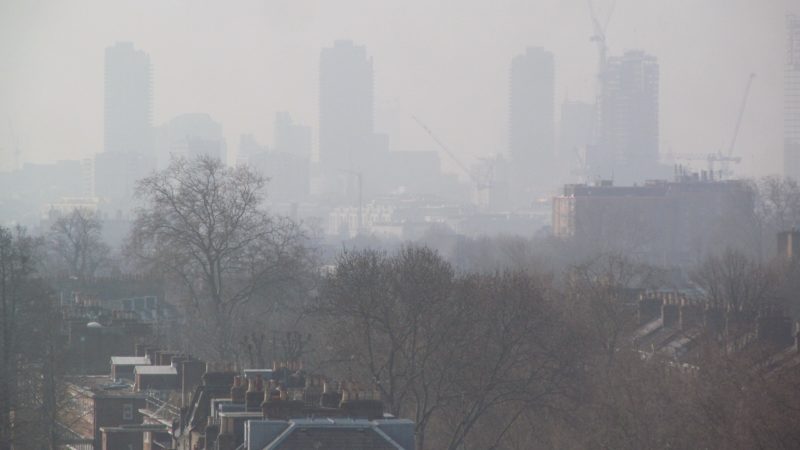 The Great Smog that killed some 12,000 people in London in 1952 may seem like a story from a bygone age. But, some 60 years after the Clean Air Act was passed to clean up our towns and cities, a new report from the Royal College of Physicians (RCP) reveals millions of people, living in dozens of UK cities, are inhaling air considered too dangerous to breathe.

Whereas in the 1950s our cities were regularly contaminated with sulphur dioxide, it is now particulates – fine sooty particles smaller than 2.5 microns – and nitrogen dioxide (NOx) that are poisoning our air. And the culprit is motorised transport.

Old King Coal, billowing smoke plumes and fumes from factories and domestic chimneys has been defeated, only to be replaced by an invisible killer. Our cities are engulfed by a noxious hell; something we might refer to as Carmageddon.

Of course, challenging a daily habit for millions of potential voters – driving to work or the shops or doing the school run – requires real political courage. But as Greens we believe we need to show our commitment to those most vulnerable to air pollution – especially the old and the young.

That is why, at our autumn Green Party conference, we launched our Breathing Cities campaign to secure zero emission pledges from five of our dirtiest cities within five years: London, Sheffield, Bristol, Leeds and Oxford.

But this must be just the start of cleaning up our act. The new research by the RCP reveals that no fewer than 44 UK cities breach recommended World Health Organization (WHO) guidelines for air quality. We need a new Clean Air Act fit for the 21st century.

Earlier this month a report from the Commission on Pollution and Health contained some stark figures. This comprehensive global analysis on pollution reported that at least nine million people a year are killed by pollution, costing the global economy trillions of dollars every year. According to the report, deaths attributed to pollution are triple those from Aids, malaria and tuberculosis combined and the crisis “threatens the continuing survival of human societies”.

In the UK, government figures cite air pollution as a factor in almost 40,000 UK deaths per year. Disturbingly, these figures are likely to be underestimates as the links between air pollution and common causes of death like dementia, diabetes and kidney disease are poorly understood.

So how should we tackle our car culture, which lies at the heart of this health crisis? We need to place ‘active transport’ and priority access for people with disabilities at the top of a ‘transport hierarchy’, followed by public transport, with private motorised transport firmly at the bottom.

Such a hierarchy is actually accepted policy by transport authorities and most councils, but seldom implemented. The prioritisation of walking and cycling will not only help our cities and towns breathe again. The RCP say that investing just £10 per person in active transport could result in enormous health and economic savings through the benefits of physical activity, prevention of road traffic accidents as well as tackling carbon emissions.

We also need to see funding reflect such a hierarchy. We should scrap major road schemes, reverse the austerity-driven cuts to public transport and increase car tax on the most polluting vehicles and use some of the proceeds to pay for a diesel scrappage scheme.

There are cities that have already taken bold steps to make the polluter pay in order to fund public transport improvements. London’s congestion charge is the obvious example, but for many cities, a workplace parking levy may be easier, quicker and cheaper to implement. This scheme, which charges large businesses for the parking spaces they provide employees, has to date only been introduced in Nottingham, but the receipts from it have helped pay for the city’s successful tram and bus system and funded cycle infrastructure. As a result, Nottingham has been named the UKs least car dependent city outside London.

We also need strong political action against those who deliberately – and in some cases illegally – stand in the way of progress on air pollution. I’m proud of the fact that that action from MEPs led to the European Parliament’s special inquiry committee into the Dieselgate scandal.

Yet, despite admitting that they cheating emissions tests, the car lobby in Europe remains all powerful and so little action has been taken to make these polluters pay. Despite a $14.7bn settlement in the US, Volkswagen, for example, has yet to pay any damages in the EU. An equivalent fine in the UK could raise more than £8 billion from VW alone. This could create a considerable sum of money to invest in sustainable transport solutions.

Of course, the car lobby would have us believe that the switch from diesel to electric cars is the answer to the air pollution crisis. Such a switch is important but it is a long way short of the full answer. Instead we need to take a long hard look at ourselves and ask important questions about the need to travel and our relationship with the car.

If we live in towns and cities, we need to challenge the whole concept of individual car ownership. Car clubs and share schemes are challenging ownership, making far more efficient use of a resource that on average spends 90% of its time idle. Such schemes almost always provide their members with access to cleaner vehicles – increasingly hybrid and electric vehicles – while doing away with the hassles and expense of ownership such as tax, MOT, fuel, servicing, repairs, depreciation and parking.

Data from a London study shows that households who use a car club travel on average 57% fewer miles by car and each car club vehicle removes 5.8 cars from the road as members sell or scrap their vehicles.  Returning to our transport hierarchy, members of car clubs also tend to choose other methods of travel first, resorting to a car only when absolutely necessary.

The privatised approach to travel may have left each of us in control of our destiny but collectively harming each other. This has to change if we are to tackle the rate of deaths caused by transport-related pollution and bring about other benefits in terms of improved mental and physical health.

It can also be a more social option, providing opportunities to catch up with neighbours on the bus or chat with friends while walking. When we finally reclaim our urban spaces as places to live, work and play without being at risk from pollution, we will wonder why we didn’t do it sooner.