Something is up when a backbench group of Conservatives can stop citizens from engaging with Parliament. 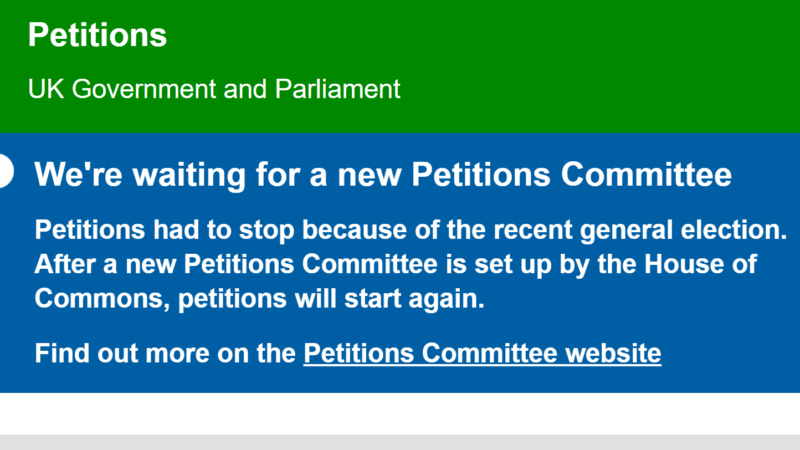 If you go to Parliament’s petition site today, you’ll see a notice at the top. It says this:

Elections to committees are organised by the Conservatives’ backbench group the ‘1922 Committee’, HuffPost reports. Yet they’ve decided to delay setting up any committees until Parliament is back from the summer recess.

With Westminster breaking on Thursday, that means September 5th at the earliest. And there were even rumours the Prime Minister would try and push that back to avoid a summer coup.

Though that no longer appears on the cards, it seems bizarre that a Conservative group – i.e. the party of government – can effectively block an important way of people engaging with Parliament and holding politicians to account.

It means no signing petitions, no starting them and no government responses (despite the government still running) – all the while the Prime Minister and her colleagues are negotiating us out of the EU with little scrutiny.

And with no committees up and running, that means citizens’ challenges to government be even more important.

I asked Parliament for an explanation. Their response was little better than that on the website:

“The Petitions website was closed as a result of the General Election in June. The system will reopen once a new Petitions Committee has been elected. This can’t now happen until the House returns from the summer recess.”

The question you have to ask is: why? We asked who runs the website on a day-to-day basis, and were told: “The website was built for us and is run by the Government Digital Service.” The GDS, of course, operates regardless of when Parliament is sitting.

So if the website is run by independent staffers, why can’t it simply be made clear that petitions signed/started won’t be discussed until the Committee is set up?

Parliament’s defence is this:

“Almost all kinds of Parliamentary business cannot be carried over from one Parliament into the next – this applies not just to petitions but also to other kinds of business, such as parliamentary questions and early day motions.”

But petitions aren’t standard Parliamentary business – they are a way for non-politicians to engage with politics, outside of Parliament. It’s part and parcel of a modern democracy. That shouldn’t stop just because MPs are on holiday.

Either way – how this has been handled points to a problem: it shouldn’t be down to an archaic Tory committee to decide if and how Parliament should operate and hold Ministers to account.

One Response to “The Tories are blocking Parliament’s petition site from running. How is that right?”