The Irish government has urged caution over the DUP deal 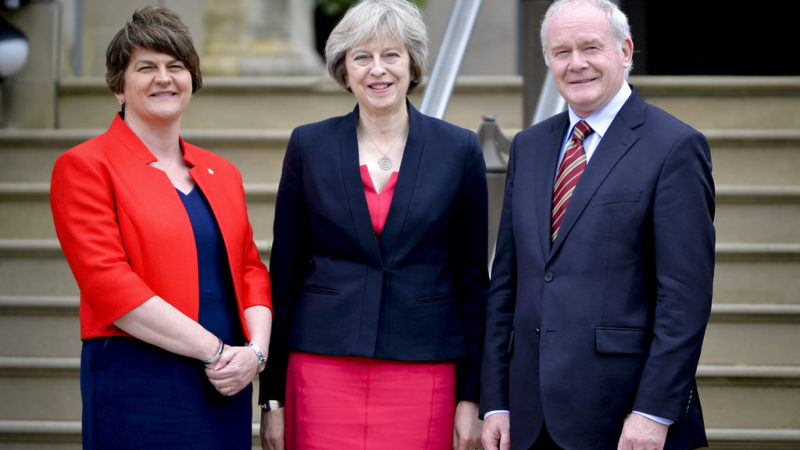 As the Tories seek to strike a deal of some sort with the DUP to enable them to cling on to power with the tips of their fingers, parties in Northern Ireland are today re-convening talks, delayed as a result of the election, to get Stormont back up and running.

They will do so in the knowledge that the Conservative Government is no longer an honest broker given that they are now reliant on the votes of DUP MPs to their survival.

As the Good Friday Agreement clearly noted, the signatories to the agreement affirmed ‘that whatever choice is freely exercised by a majority of the people of Northern Ireland, the power of the sovereign government with jurisdiction there shall be exercised with rigorous impartiality on behalf of all the people.’

It is then little wonder that the Irish Taoiseach, Enda Kenny, has expressed his concern to Theresa May about the UK government’s ability to inspire confidence that they can act as neutral arbitrators.

Meanwhile, his soon to be successor, Leo Varadkar has warned the UK government should not to get too close to the DUP. In a thinly veiled attack, he has said of plans for a deal between the Tories and the DUP:

“Our role as governments is to act as co-guarantors, not to be too close to any particular party in the North, whether it’s nationalist parties or unionist parties. That’s certainly something I will emphasise in any contacts that I have with Prime Minister May.”

Summing the mood up, the Belfast Telegraph notes:

“No doubt Sinn Fein will …query the close involvement of the DUP with a British Government which has to be seen as being a strictly neutral mediator between the two parties.

“Despite the apparently increasing polarization here, the fact remains that the ordinary people desperately want the Assembly to start its work again. While the major political developments both here and in Westminster are gaining much attention, the stark reality remains that we need joined-up government at Stormont to make progress on a whole range of important issues.

“The old adage, ‘Where there’s a will, there’s a way’ still holds true, but the majority of people in Northern Ireland are still bluntly asking the Stormont politicians: ‘Do you really have the will to make it work?'”

The Irish Examiner meanwhile launches a strong attack on Sinn Fein for its refusal to take its seats in the House of Commons. In its editorial the paper concludes:

“Brexit is the dominant issue today and its consequences may shape this economy in profound ways. A hard Brexit might ruin it. Sinn Féin are in a position to at least neutralise the May/Foster axis. If they don’t take that opportunity they will betray not just their Northern voters but everyone on this island. That they won’t shows once again where their skewered priorities lie.”

The Belfast Telegraph meanwhile has expressed support for a confidence and supply deal, but noted that the DUP will know all to well that ‘it should proceed on the assumption that another election could come at any point.’

Noting that the Government has imposed a 29 June deadline for talks to bring Stormont back to life to be concluded, it goes on to declare fairly starkly:

“Nationalist complaints about a Tory government, propped up the DUP, implementing such rule are hypocritical nonsense. Sinn Fein might soon be in government in Dublin and republicans would not for five seconds accept that as an impediment to SF’s role on either side of the border.”