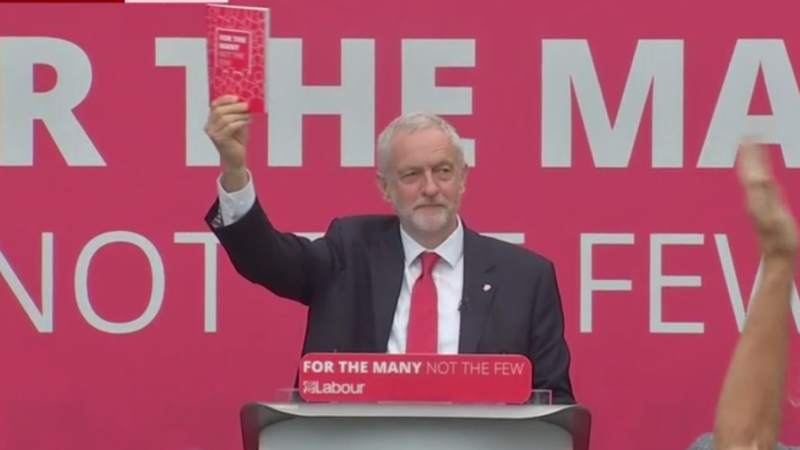 Jeremy Corbyn launched Labour’s most radical manifesto in decades this morning, promising to build a ‘prosperous society for the many, not just the few’.

Speaking in Bradford, the Labour leader said that in the general election campaign so far ‘opinion has started to move towards Labour’.

“There is no great secret as to the reason. People want a country run for the many not the few.

That is because for the last seven years our people have lived through the opposite; a Britain run for the rich, the elite and the vested interest. They have benefitted from tax cuts and bumper salaries while millions have struggled. Whatever your age or situation, people are under pressure, struggling to make ends meet.

Our manifesto is for you.”

The major proposals include:

While many of the policy proposals were already known due to the draft manifesto leak last week, today’s major new information came from the costings document published alongside the manifesto.

Labour says it can raise £48.6bn from higher taxes and a crackdown and avoidance, which would meet its public spending commitments, according to the costings document.

However, those spending figures do not include the costs of renationalisation of several key industries. Labour is claiming that this counts as investment, for which it is entitled to borrow under John McDonnell’s fiscal rules. But it’s not clear what the extent of that borrowing will be, and the issue will undoubtedly be a source of controversy.

Corbyn also offered a direct challenge to Theresa May, accusing her of running a campaign based on fear and calling her to take part in a general election debate.

“Will the Tories change their spots?  Don’t bank on it. Their record says they won’t. Theresa May will disagree of course.

So I say to her today:  Prime Minister, come out of hiding and let’s have that debate on television so millions can make up their minds.

What are you afraid of?  It’s not too late. Let’s debate our two manifestos. Have the argument. I am confident that once the British people get the chance to study the issues, look at the promises, they will decide that Britain has been held back by the Tories.”

The Conservatives have not yet published their election manifesto.

3 Responses to “Corbyn promises a Britain ‘for the many, not the few’ at manifesto launch”