Let this be the year the international community takes a stand 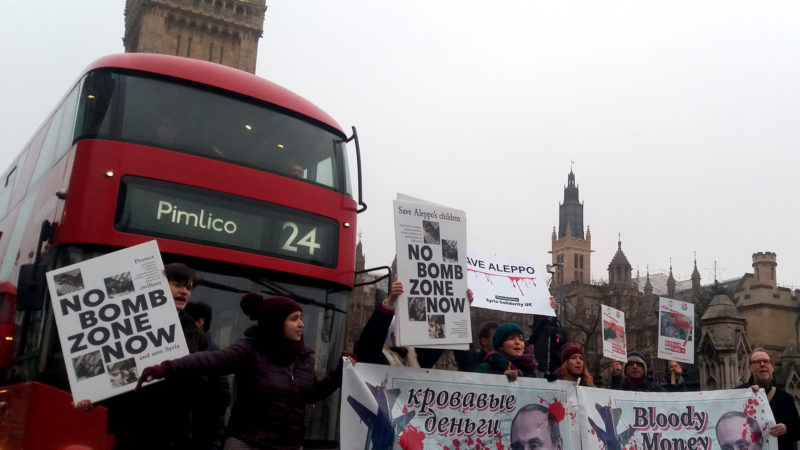 Six years ago, thousands of Syrians took to the streets to protest the brutal Assad regime. The Assad family had kept power for four decades through repression, imprisonment, torture, and mass killing.

The people who protested knew what they were up against, remembering how the regime had slaughtered tens of thousands in Hama in 1982.

In 2011 the regime even tortured children who dared write anti-regime graffiti on a wall in Daraa.

People knew, and still they took their lives in their hands, marching, singing, dancing in the streets. Videos of those first protests look incredible now, the buildings intact, the streets filled with humanity. Today’s images are the reverse. Humanity driven out. Cities, towns, homes crushed.

The slogan of regime thugs was ‘Assad or we burn the country.’ They have. In the past, the regime had sponsored terrorism to destabilise neighbouring countries. From 2011 it turned the same strategy against the opposition.

Peaceful protesters were jailed while jihadist veterans of the Assad-sponsored terror campaign in Iraq were released, and pro regime ‘Shabiha’ gangs carried out sectarian massacres to deliberately drive communities apart.

Al Qaeda in Iraq had been a longtime client of Assad’s. In 2013-2014, it rebranded as ISIS and moved against the Syrian opposition, aided by Assad’s air force which targeted the opposition but not ISIS.

The scale of Bashar al-Assad’s brutality outstripped that of his father, bombing and shelling city after city, killing hundreds of civilians with nerve agent and chlorine. But this was not enough to defeat the revolution.

To survive, Assad invited in Hezbollah, then Iranian military forces, sectarian militia from Iraq, and even Afghans recruited by Iran. By 2015 Assad teetered on the edge of collapse.

Now in 2017 Assad is in hock to Shabiha warlords, to Iran, and to Russia. He rules from a position of weakness over a patchwork of competing interests that between them control the biggest population centres, but only a minority of the territory of Syria.

Opposition-held territory is still under daily attack, despite a ceasefire announced by Russia and Turkey in December. In regime-controlled territory detentions continue, and thousands upon thousands remain hidden in Assad’s torture prisons.

For Syrians who have fled, return to either bombing or torture is not an option.

The UK government has never backed any serious proposal to protect civilians in Syria. Even the abortive proposal for action after the Ghouta chemical massacre focused not on protecting civilians but on punishing the use of just one category of weapon.

Calls for a no-fly zone or no-bomb zone were locked by Western leaders who didn’t want any responsibility for what would come after. In the name of ‘stability’ the regime was given license to murder.

When the House of Commons voted against action in 2013, too many people here saw that as the end of the story and turned away. Then the number of Syrian refugees registered in the region was 1.84 million. Today it is close to five million.

The various counts of numbers killed outstrip the capacity of our imagination. Half a million or more people are estimated killed, but the fracturing of control makes a reliable total impossible. The Syrian Network for Human Rights has counted a minimum of 206,932 confirmed violent civilian deaths.

Throughout 2016, Syria Solidarity UK and others campaigned for humanitarian air drops to besieged civilians. Behind the scenes at least some in the Foreign Office and elsewhere tried to make this happen.

Serious proposals were developed to use existing drone technology at relatively low cost and at no risk to UK personnel, but these ideas were blocked. It seems the Ministry of Defence is more interested in spending money on developing new drones to kill rather than on drones to save lives.

In 2017, UK diplomats are still saying the right things, still supporting the Syrian opposition in negotiations that are supposed to lead to inclusive representative legitimate government. And DFID continues to provide humanitarian support in the region to victims of the war.

But in Syria now it is military action that determines political and humanitarian outcomes. Current negotiations seem even more of a sideshow than previous efforts, and the UK’s humanitarian effort continues to be a costly attempt to contain the damage while doing nothing to bring it to an end.

While the Foreign Office and DFID present the best face of UK policy, the Ministry of Defence falls in line with a US policy that targets only ISIS and seems happy to hand territory over to Assad, Hezbollah, and Russia, with no regard for the consequences.

This year we must not turn away.

See: Syria is a war against humanity: We must defend ourselves