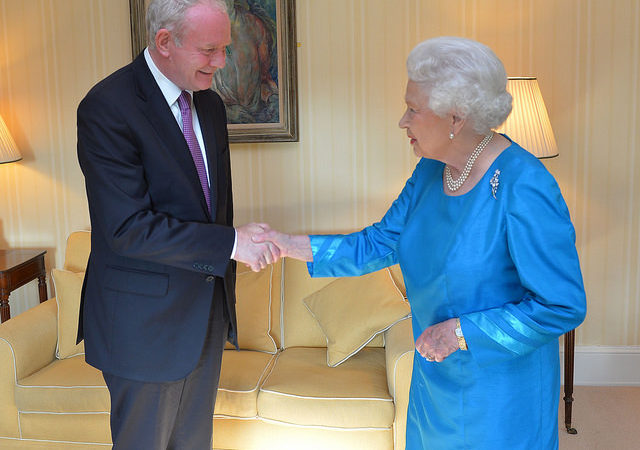 It may be the most hopeful image ever taken in an IKEA showroom. Ian Paisley and Martin McGuinness — sworn enemies turned government colleagues turned chuckle brothers — smiling together on a red sofa at the Swedish retailer’s Belfast launch in 2008.

These two men did plenty I’d condemn. But I’d rather remember the way they were in this photo at this time and the huge journeys this took pic.twitter.com/2nGp3UDg2a

The tributes that Paisley’s sons have paid to McGuinness — who died early this morning — demonstrate that their smiles weren’t only for the cameras. It was a real and lasting friendship, surely one of the most remarkable political relationships of the last century.

Of course, McGuinness’s legacy must be assessed in the round, including his complicity in IRA atrocities and, more recently, his party’s failure to honestly recount and atone for its past and indeed his purely political failures as deputy first minister. But leaders across Ireland and Britain — and others he dealt with during the peace process — have paid tribute to his sincere commitment to peace.

There remains great cause for concern, particularly with regard to how Northern Ireland can manage and respond to Brexit and to its current political stalemate. But despite the turbulence, there’s little reason to fear a descent into violence, a situation that was difficult to imagine even 20 years ago.

In the current context of extreme political division and uncertainty about the future — in Northern Ireland, across the UK and around the world — the transformations of McGuinness, Paisley and Northern Ireland remind us that politics is meaningful, that politicians are not always in it for themselves, that differences can be set aside in the interests of the greater good and that, where the will exists, true change is possible.