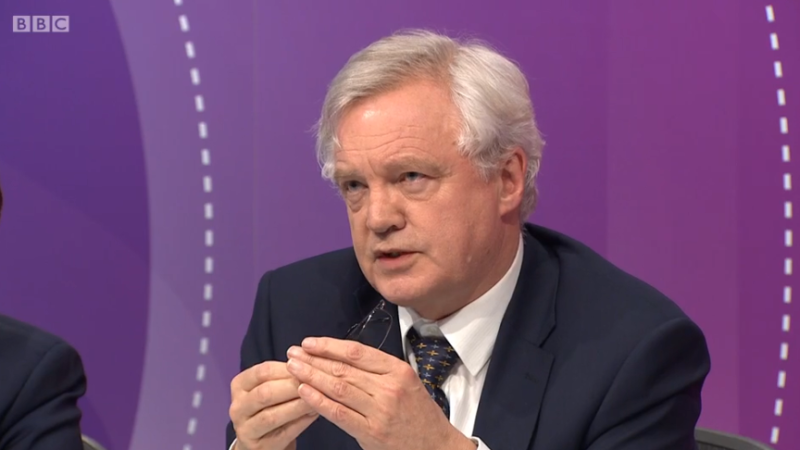 Theresa May has placed controlling immigration at the centre of her Brexit policy, stating at Tory conference that given a choice she would sacrifice single market ‘access’ on this alter.

How strange then to see her Brexit Secretary David Davis on a special Brexit edition of BBC Question Time last night sounding positively Blairite about the importance of migration and how numbers should be determined by the needs of business and public services.

When asked by host David Dimbleby, ‘Will there be a cap on the number of EU migrants allowed in the UK?’, Davis replied: ‘No.’

“The first issue here is to bring this back into the control of the UK government and the UK parliament – to bring migration under control.

He then passed the buck to his colleague Amber Rudd, saying ‘it’s for the Home Secretary to decide what the policy should be’, but he added:

“I cannot imagine that the policy will be anything other than that which is in the national interest.

That’s how it will no doubt work, and that will be in everybody’s interests, the migrants and the citizens of the United Kingdom.”

This is a world away from the rhetoric of the Prime Minister, who wants to give the impression at least of a coming crackdown on migration numbers.

May is still under pressure from the Right on having been Home Secretary when the Conservative Party repeatedly made and broke it’s pledge to cut annual migration to ‘the tens of thousands’.

Yet when Davis was pressed on numbers, he said: ‘What it will be is whatever the government judges to be sustainable.’ On the tens of thousands figure, he was clear as mud:

“I think we’ll get there, but the simple truth is that we have to manage this properly.

You’ve got industries dependent on migrants, you’ve got social welfare, you’ve got the national health service, you have to make sure they continue to work.”

Does he therefore believe those industries and services will need less migrants in the future, say, below 100,000? On what does he base this assumption?

Migration is either ‘managed’ (The Times speculates a role for the Migration Advisory Council) or it is led by demand. Or can there be flexible management with changes from year to year? And is that what Leave voters were expecting?

The difference between what Davis appears to be saying and the New Labour position was that, for the latter, government cannot know how many migrants those industries and services might need in a given year, and so a sort of market logic should determine what happens.

Thus the Tory Brexit Secretary is staking out a position that could be considered to the Left of New Labour on the merits of centralised state power!

Big Brother Theresa certainly has no problem with a big state when it comes to security, and is reportedly a major ‘control freak’. But will she now apply this statist approach to migration – and by extension the economy and public services?

Or is the person charged with running Britain’s exit from the European Union making it up as he goes along?

See: Brexit is not all about immigration – why has Theresa May made it her overriding priority?