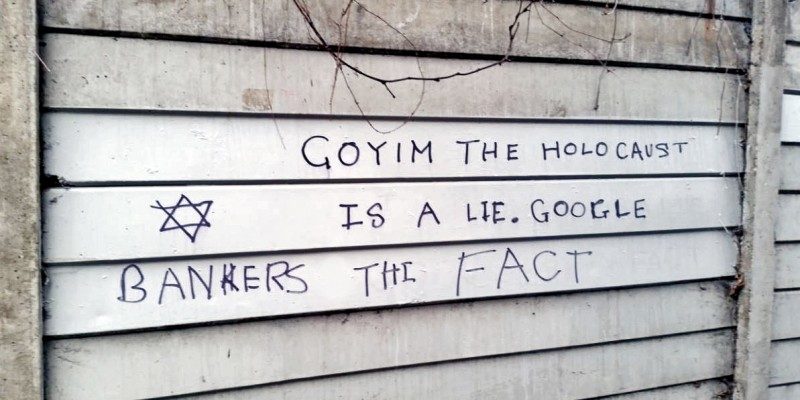 Anti-Semitic incidents in the UK have risen 36 per cent from 2015 to 2016, the highest level in over thirty years.

A new report from the Community Security Trust (CST), which provides security for Jewish people in Britain, records 1,309 incidents of anti-Semitism in 2016.

This means last year had the highest number of anti-Semitic incidents since the CST’s records began in 1984.

Labour Party Deputy Leader Tom Watson called the rise ‘shocking’, saying ‘we must root out anti-Semitism whenever it takes place and wherever it exists’. 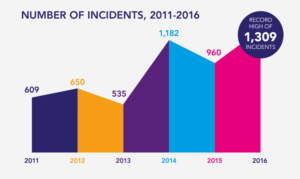 There were no ‘trigger events’ in 2016 to explain the rise, and the high number of incidents was spread throughout the year.

There were 100 incidents each month between May and December, in what the CST called an ‘unprecedented’ rate: in the decade before 2016, there were only six occasions when monthly totals were above 100.

“While Jewish life in this country remains overwhelmingly positive, this heightened level of
anti-Semitism is deeply worrying and it appears to be getting worse.

Worst of all is that, for various reasons, some people clearly feel more confident to express their anti-Semitism publicly than they did in the past.

CST will continue to support the victims of this hatred and we call on others to join us in confronting it wherever it appears.” 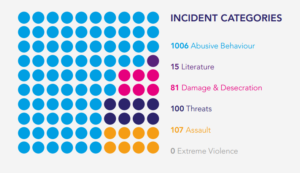 There were also 100 direct threats, 107 violent assaults, 65 cases of damage or desecration of Jewish property, such as synagogues, and 15 cases of mass-mailed anti-Semitic leaflets or emails.

“The findings of this report are extremely distressing. I don’t want to live in a country where any member of the Jewish community feels unsafe, afraid or discriminated against and it is shocking that the number of anti-Semitic incidents is on the rise in the UK.

It’s vital that we continue to highlight the abuse Jewish people are experiencing and as Deputy Leader of the Labour Party I have made a commitment to do exactly that.

We must root out anti-Semitism whenever it takes
place and wherever it exists, as a party and as a country.”

CST reports are very scrupulous. 791 reports of potential anti-Semitism were excluded for not meeting its criteria.

Cases of organised abuse on social media were counted as single incidents, rather counting each Tweet or message as a separate incident.