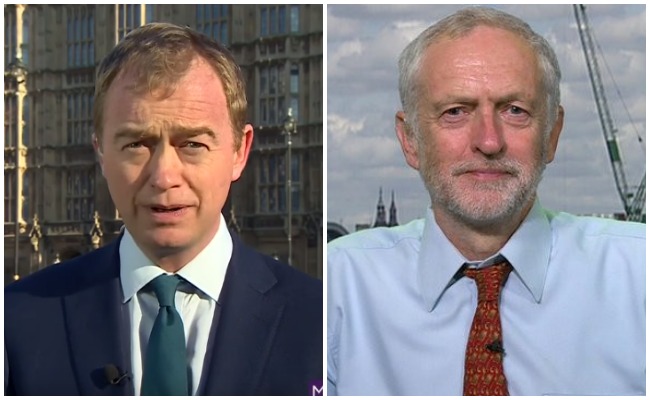 Lib Dem leader Tim Farron has written to Jeremy Corbyn ahead of a Supreme Court ruling today, calling on the Labour leader to clarify his party’s position on triggering Article 50.

Corbyn has said Labour MPs will be asked to vote in favour, while the Lib Dems will not vote to trigger Article 50 without a referendum on the Tories’ Brexit deal.

Here is the full text of Tim Farron’s letter to Jeremy Corbyn:

I am writing to you about the upcoming vote on the triggering of Article 50 in parliament.

As we both know the government will shortly bring forward a Bill to trigger Article 50 and begin the process of negotiating our departure from the European Union.

The result of the referendum was close and no one has had a say on what type of Brexit the government should seek to pursue. There will be many people who voted ‘Leave’, who like the former Conservative MP Stephen Phillips, nonetheless want to remain members of the single market.

Theresa May has decided to take the result of the referendum last June and use it to try and impose a hard, extreme Brexit which has no democratic mandate. I am concerned that Labour seems to be supporting this action.

I am clear that the Liberal Democrats will not vote to trigger Article 50 if the public are not guaranteed a referendum on the outcome of the government’s negotiation, where people can decide to accept the deal the Government makes and leave the European Union, or reject the deal and remain within the European Union. That is a red line.

The public needs clarity on what you will instruct your MPs to do.

There are reports that you will impose a three line whip to vote for Article 50 – something that seems extraordinary given the lack of safeguards or detail the government has offered in regard to key areas of any renegotiations.

Will you now clarify your position on MPs voting for the triggering of Article 50?

Once we have seen the Bill we will seek amendments in a number of areas including measures to guarantee membership of the Single Market (not just access to it). I hope that you will reconsider your support for the government in leaving the Single Market, and join with us in arguing that we need to remain a member of the world’s largest marketplace.

There is nothing progressive about giving Theresa May a blank cheque to decide what form of Brexit she thinks is best and impose it on the country.

If Labour believe amendments are needed then surely if they do not pass you should vote against the Bill? How can you vote for triggering Article 50 if it sets in train a hard Brexit that will damage our economy, cost jobs and goes against the will of those who voted Remain, and likely a large number of those who voted leave too?

I look forward to hearing from you, and hope that you reconsider your stance.

Leader of the Liberal Democrats.

Tim Farron MP is leader of the Liberal Democrats. He Tweets @TimFarron