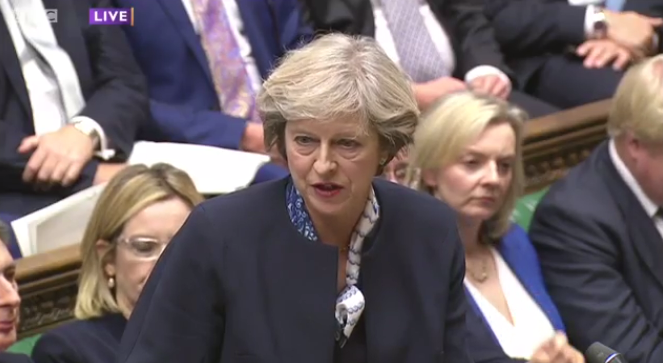 At an event in London on 12 October, British Prime Minister Theresa May issued a stern warning to human traffickers. ‘We are coming after you’, she said.

It’s a tough and, to many, inspiring message, which she has backed up with action, most specifically the passage of the UK’s Modern Slavery Act in 2015. But, as she and her Anti-Slavery Commissioner Kevin Hyland have acknowledged, there are considerable obstacles to overcome.

In an interview with Thomson Reuters Foundation, Hyland said:

‘There aren’t enough resources being allocated to this, and there isn’t enough coordination.

The criminals are very much operating with impunity.’

He noted that, ‘really one in four crimes are being properly investigated or ending up on a crime report.’

This is borne out by the experience of those working directly on the issue: in one case I dealt with for Anti-Slavery International in 2015, a potential victim of trafficking had approached two different police stations in two different cities with a credible account of having been trafficked. In both instances he was turned away and told it was an ‘immigration matter’.

To a certain extent this is unsurprising, even understandable, in an era where the police have been faced with the same sort of eye-watering cuts that the rest of our public services have had to endure.

In this environment there have been few resources for training so that ordinary police are aware of how to identify forced labour and what their legal responsibilities are towards its victims, let alone to invest in the sort of investigation and coordination that the Anti-Slavery Commissioner identifies as vital.

However, the difficulties in relation to responding to trafficking and contemporary slavery run deeper than the application of the law. They relate to the uneven nature of the law itself across the United Kingdom.

In a forthcoming report by the Anti-Trafficking Monitoring Group – a coalition of non-governmental organisations led by Anti-Slavery International – finds that victims of contemporary slavery identified in England and Wales are at a big disadvantage compared to those in Scotland and Northern Ireland.

The relevant Acts in Scotland and Northern Ireland both include, within the laws themselves, the minimum international standards of support and assistance for victims, and place duties on the authorities to provide this support.

This perhaps is a another cause of the lack of prosecutions that Kevin Hyland and Theresa May so rightly decry. Anti-Slavery International has for years stressed that victim protection is fundamental to any successful anti-slavery strategy.

This is not only because protecting the victims of traumatic crime is an obligation of any civilised country. It is also because by gaining their trust they can be crucial in helping the authorities prosecute the perpetrators.

Hence the continuing dire position of Overseas Domestic Workers (ODWs) across the UK. The government refuses to grant domestic workers the universal right to change employer and renew their visa annually, which was the recommendation of its own review.

This puts enormous power into the hands of their employers and, time and again, this has been shown to result in serious exploitation and enslavement of these workers.

In other words, as it stands, the Overseas Domestic Worker visa is a de facto license, issued by the Home Office, for trafficking for domestic servitude, and in practice renders the victim protection measures available to others beyond their reach.

The report also highlights failures in relation to the protection of children.

Although child guardianship schemes have been included in all Acts, there are key differences when it comes to who is entitled to have a guardian, how the guardian is appointed, and when and for how long a guardian will be able to represent the child.

However this is, to a certain extent, an academic point as to date none of the proposed models for child guardianship have begun. In fact, the full implementation of the scheme for England and Wales is scheduled for as late as mid-2019.

Theresa May’s leadership on the issue of slavery has earned her praise from many across the world, including Anti-Slavery International. But to make good on the threats she hearteningly offers to traffickers, she must first ensure that their victims are properly protected.