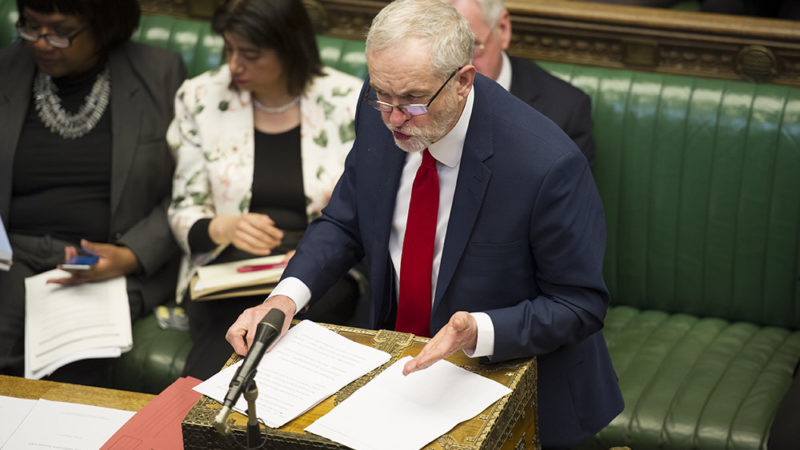 This piece was written in response to an article published last week: What do Jeremy Corbyn’s critics mean by ‘good leadership’?

In May 2015 when I was still at university, I campaigned and voted for the Green Party in my constituency in Oxford.

This was the first general election in which I was eligible to vote and, while I had identified as a Labour supporter since the age of around 12, I was not only uninspired by our candidate, I was genuinely concerned about the message he was putting forward.

During a time of massive social and political upheaval which, to any sensible observer, seemed like the death throes of neoliberalism, the Tories had executed a masterful campaign of psychological warfare, repeating the message ‘you have to pay off your debt’ until it became the one certainty, the one form of stability, to many uncertain people living through highly unstable times.

Ed Miliband had no answer to this; he simply put forward slightly more progressive answers to the problems posed by the Tories. He never challenged their narrative, so he was never able to shift the conversation.

Despite not voting for Labour I, along with half the country, was still shocked when the Conservatives won the 2015 general election.

Having no love for Ed Miliband and much for Caroline Lucas, I still couldn’t believe that the people of this country had gone to the polls and chosen to maintain the status quo. Of course in the back of my mind I was aware that it was this kind of attitude which lay at the centre of Miliband’s failure.

It was at that point that I decided to join the Labour party – oddly enough before the candidates for the leadership contest had even been announced.

I decided that, regardless of its flaws, Labour was the only force strong enough to defeat the Conservatives. Yes it had lost touch, yes it was uninspiring and yes it lacked leadership, but I convinced myself that these were all problems that I could help to fix from the inside.

Fundamentally, I wasn’t ready to live in a society where there was no credible opposition to a party which has presided over some of the largest increases in inequality, homelessness and child poverty since the time of Dickens.

I prepared myself for a long battle and a lot of hard choices during the leadership contest. But then, along came Jeremy Corbyn – and I couldn’t quite believe my luck.

Here was a principled man, clearly not motivated by power or personal ambition, who had opposed austerity – and indeed the creeping advance of neoliberalism – for his entire life.

I didn’t agree with many of his personal beliefs, but that didn’t matter because ‘it’s the economy, stupid’, and on this he was on point. I went to rallies, I campaigned, I attended meetings, workshops, seminars, I convinced my friends to join and vote for Corbyn.

I did these things because I believed that this would be the moment when the economic consensus of the last 20 years would be decisively challenged – a consensus crafted in the bowels of Mont Pelerin which had eroded our democratic institutions and delivered a capitalism on steroids that wrecked the economy.

I believed that Corbyn had the power to challenge the hegemony of neoliberalism and propose a new post-Keynesian approach which would transform this country’s thinking about the economy just as much as Thatcher and Reagan had in the 1980s.

There was no shortage of economists ready to testify that the financialisation of the global economy had enriched a tiny swathe of elites at the expense of the people and businesses who drive economic growth. All they needed was a leader to unite them, and give ordinary people a framework through which to understand their ideas.

So when David Cameron sat across the dispatch box shouting ‘what the Honourable Gentleman doesn’t realise is that we have to pay off our debts’, Corbyn could have done something different.

He could have pointed out that the Labour Party does not disagree that maintaining the UK’s creditworthiness is important. It does, however, oppose David Cameron’s plans to do so by crippling the long term growth potential of the UK economy; it opposes the principle of starving your family to stabilise your finances.

But he did not do this. As the weeks wore on, and people’s negative views of Corbyn were slowly reinforced because he wasn’t out there changing them, and as more and more predictable mistakes were made, and as the Tories slowly disembowelled the welfare state, the sheen started to wear off Corbynism for me.

Because he has so utterly and transparently failed to do the one thing I hoped he would do when he became Labour leader: he hasn’t managed to get people to talk about the issues that matter.

He hasn’t changed the conversation. He hasn’t even begun to change the narrative. And I’m not sure that I can forgive him for that.

I will vote for him again in another leadership election, purely because there are no other tenable candidates and I do not want my party to split in two. But I am deeply saddened that it has come to this point.

Yes, austerity has been truly discredited, but people no longer have access to a simple framework which allows them to make sense of the world.

I do not know what is going to happen over the next several years, but I do know one thing: the moment when the old is dead and the new is not yet born is a very dangerous time indeed.

Grace Blakely recently graduated from a degree in politics, philosophy and economics. She now works in Greater Manchester on the city-region’s devolution programme