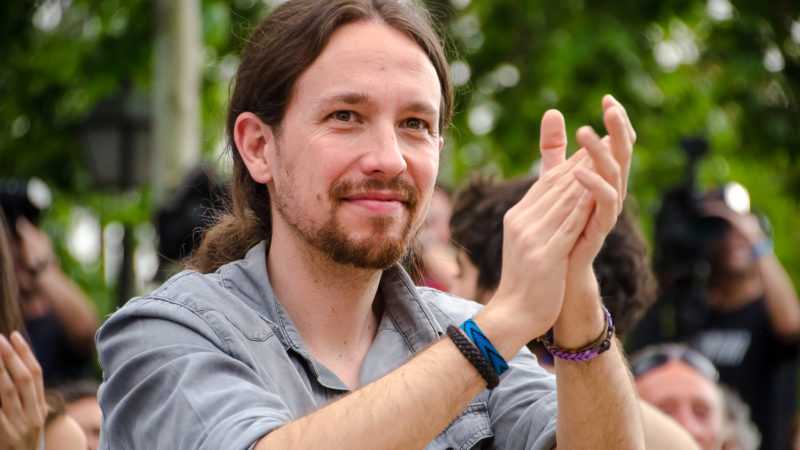 On a sunny balcony somewhere in Spain, an ordinary-looking thirty-something man waters his plants. A young professional relaxes in her living room, while a twenty-something poses with his Bob Dylan poster.

At first sight, it looks something like a Habitat catalogue. But this is no catalogue; it’s the June election manifesto of Podemos, Spain’s dynamic new Left-wing party.

The upcoming poll, scheduled for the June 26, will be critically important for Spain, and for the European Left.

Held in the wake of the deadlock resulting from last year’s general election, this round holds out the possibility of a Left-wing coalition government led by the anti-austerity Podemos, one of the most radical and progressive electoral forces on the continent.

Yet for a radical party, the design of their manifesto may seem puzzling. There is barely a drop of red to be found. The words ‘socialism’ and ‘fairness’ do not occur at all, and there is only one mention of ‘inequality’ in the body of the text.

Policy areas are structured, like a catalogue, around areas of the house—with food policy under ‘kitchens’, housing under ‘bedrooms’. There are no slogans, no moral discourses. Instead, policies are described in terms of the benefits they will offer to voters, and to the country.

With such moderate presentation, one might expect Podemos’s policies to be lacklustre or even right-wing. They are anything but.

The manifesto proposes a list of reasonable, radical policies, ranging from a Tobin tax to green energy, from debt restructuring to the promotion of an active industrial policy to diversify the economy. In short, this is a powerful, anti-austerity manifesto, and a proposal to end the stultifying reign of neoliberal ideology.

Podemos’s moderate presentation is not an accident. Their design and presentation have been carefully considered from the beginning, as has the language they use.

Pablo Iglesias, leader and architect of Podemos’s electoral strategy, has explained on many occasions how vital it is for the party to reach out to people who did not necessarily feel an affiliation to the Left.

They recognised early on that while red flags, the Internationale, pictures of Che Guevara and Marxist slogans may stir their own hearts, for most people these are nothing but bizarre and alien symbols, which signal membership in a strange and uninviting cult.

In a direct message to the ‘old Left’ last year, Iglesias upbraided his opponents for refusing to see this.

‘You are ashamed of your country and your people’, he said. ‘You think the people are idiots…that you are enlightened, and you love to revel in a kind of culture of defeat…

You can sing the Internationale, you can have your red stars… but I don’t want anything to do with that.

In fact, you can just go away, because I, too, enjoy all of that, and I am moved by it. But I don’t want to do politics with it.’

The fruits of this approach are indisputable. Podemos’s meteoric rise has accomplished in a few years what traditional parties of the radical Left could not achieve in decades.

By reaching out to voters through a language and a culture they understand, rather than attempting to remake the electorate in their own image, Podemos has shown that there can be a future for Left-wing politics in Europe.

For many on the British Left, this sentiment rings alarm bells. After all, isn’t this what Blairism was all about—compromising our principles to get elected at any cost?

But Blairism was about far more than presentation. It was a capitulation to neoliberal ideology, to the assumption that there was simply no alternative.

To adjust presentation and vocabulary in order to reach people is not a compromise on substance. It is a gesture of respect and a recognition of the humanity of those we wish to carry with us.

It is time for Labour to learn this lesson. One can be radical and communicate effectively at the same time. As Pablo Iglesias has argued, morality has a role in politics, but without good tactics, there is little point to seeing politics as a moral crusade.

The British Left is at a critical juncture. Today, there is overwhelming public support, even among Conservative voters, for measures such as railway and energy nationalisation. For the first time in a generation, Labour has a leadership which is prepared to deliver these policies, and bring an end to neoliberal dogma.

But so long as the party allows itself to be seen as a group of zealots on a moral crusade, the vast majority of voters will never trust it.

Giving up the songs, the banners, and the moralising language may be difficult, particularly for those who wear Leftist politics as a badge of identity.

But those politics are meaningless without the electoral victories necessary to implement them. It is time for the Left, in Britain and across Europe, to do what it takes to achieve those victories.