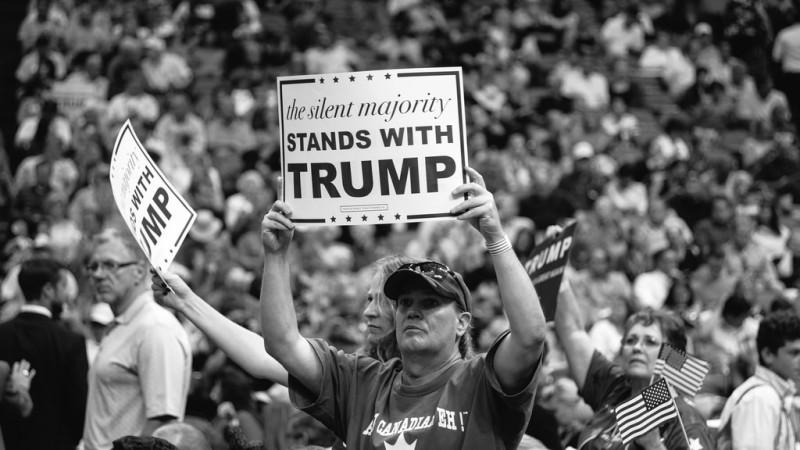 At every Donald Trump rally there is a moment when the reality show host yells:

The crowd roars back its agreement. To the uninitiated the exchange seems innocuous. However, The Donald is telegraphing to his supporters that he is wholly on the side of the police officers implicated in the shooting of African Americans during the now-famous stop and search encounters recorded on cell phones.

Trump’s war on political correctness grants permission to give voice to insults. Racism never went away; it just kept its thoughts to itself for fear of rebuke from people with better manners. A source of Trump supporters’ anger, evidently, was being polite while ‘they’ got ‘special treatment.’

This dog whistle is heard beyond Trump’s natural constituency. Here is a sample of comments heard by your correspondent, uttered by people who consider themselves too sophisticated to support Trump, yet who now feel liberated from socially suffocating manners:

“It’s been a long time since slavery. Haven’t they got over it yet?”

“They’re just looking for excuses for their failure because they’ve been overtaken by every Vietnamese boat guy who arrived with fifty cents in his pocket and now his kids are at Harvard.”

“The Obamas are just another couple of n______ in government housing.”

Or, “Michelle dresses like she’s on her way to a n_____ wedding on the south side of Chicago.”

This comes as a nasty shock to the millions of Americans who believed they were winning the battle against prejudice. Shortly after Obama’s inauguration, a Democrat friend announced smugly, ‘There’s no more racism in America, now.’

This is news to the 12 per cent of the US population who are African American and the 16 percent who have Latin American roots. When challenged, my friend admitted ‘those people in the south’— meaning millions of Republicans and ‘white trash’ in the southern US states— are ‘still racist.’

This image — Southerners are primitive KKK types, while the rest of America is colour-blind — is reinforced by popular culture, like the stereotypical Hollywood bad guy who is a dim slob with an Alabama drawl.

Yet, Trump’s dog whistle anti-black messages, and not-so-subtle anti-Hispanic rhetoric, clearly resonate more widely, as his success in primaries in every region of the States shows. The violent treatment of Black Lives Matter protesters and other people of colour at his rallies also sends a clear message.

Since the civil war, many Americans have embraced the myth that only southerners are bigots. However, in The Warmth of Other Suns, Isabel Wilkerson describes years of white hostility and violence toward the blacks arriving in the north in search of economic opportunity.

Her remarkable book describes ‘the great migration’ of African Americans from the south to Chicago, Detroit, New York, Oakland and other cities. Far from finding tolerance, they were met by riots, and the giant sucking sound of white flight from inner cities.

During my youth in the 1960s we could drive for hours through ‘liberal’ New England before finding a hotel without a ‘Restricted Clientele’ (no blacks or Jews) sign. Yet, when I recount this inconvenient fact, northern Americans insist this was only the case in places like Georgia.

Their idealised memory in no way reflects everyday experiences among Americans of colour then, or now.

At state level, the Republican Party has systematically closed voter registration offices and polling booths in areas with a high concentration of African Americans or Hispanic Americans. They deliberately put dozens of propositions on ballot papers, so voters must wade through 12 pages of ballot.

This bewilders voters who think they are obliged to vote on each proposition, thus causing five hour waits at polling stations.

Both Democratic candidates, Clinton and Sanders, have highlighted the disproportionate number of blacks and Hispanics in jail. They should also draw attention to how African Americans are ‘upgraded’ to qualify them for execution.

The lawyer Robert Sanger describes how courts increase minority defendants’ IQ scores. Citing dubious theories about the lesser aptitude of blacks taking IQ tests, they raise scores by an average of five to fifteen points, putting black defendants above the 70 IQ red line at which the death penalty applies. Below 70, a defendant is considered incapable of knowing right from wrong.

As if that were not reason enough for black people to feel aggrieved, their communities remain badly served: the tainted water in Flint, Michigan, can be found in many areas where blacks and Hispanics live in large numbers.

In Medical Apartheid, Harriet Washington catalogues the way in which drug companies trial their new products in African American areas, knowing poor people will risk their health for a few dollars. (Better known are Washington’s descriptions of how, during slavery, doctors would practice operations—without anaesthetic—on blacks once they became too old to work).

But saddest are her contemporary interviews with black prisoners volunteering for drug trials because, ‘It’s the only time anyone handles me kindly or talks to me like I’m a human being.’

Equally concerning is the disparity between the rate at which doctors prescribe painkillers to whites and blacks, partly because an alarming number of white doctors believe black people’s nerve endings are less sensitive than whites.

A recent survey of white medical students found half of them held false beliefs about racial differences (‘black skin is thicker,’ ‘white brains are bigger’).

Surveying racial politics in this election cycle, the words of Mississippi writer William Faulkner seem as apt as ever: