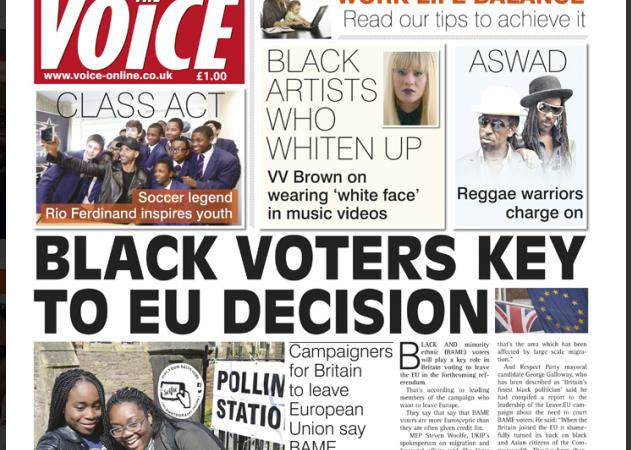 With visible ethnic minorities making up 14 percent of the population and some polls putting the ‘remain’ lead at as little as two points you might assume that BAME voters would be targeted by both camps.

‘Stronger In’ co-opted June Sarpong amid initial fanfare but have made little use of her since to appeal directly to ethnic minorities. Instead UKIP’s immigration spokesman Steven Woolfe MEP is single-handedly pushing the ‘out’ campaign directly at voters of colour, all three million of them.

In addition to being quoted on The Voice’s front page, Woolfe has popped up on BBC Radio 4’s Today programme comparing the Brexit cause with the fight against Apartheid South Africa, posting graphics on Twitter, and speaking at a British Future conference, which generated national media coverage.

The ‘remain’ camp have given Woolfe a free run, which suggests they are taking BAME votes for granted. This is not wise, as research shows particular dynamics are at play around Europe and people of colour.

Any complacency may stem from the failure of polling companies to regularly monitor BAME attitudes on the referendum despite delving into every other conceivable segment of society.

However, this is not an acceptable excuse for any national EU campaign. The ‘in’ camp cannot stick its head in the sand while Woolfe and Nigel Farage talk about the Commonwealth at every available opportunity, in a direct appeal to BAME voters.

EU supporters need to engage directly instead of sticking rigidly to arguments about the benefits of the EU more generally.

This was the same mistake pro-voting reformers made in the AV referendum, where an undiverse campaign – in literature and message – failed to turn potentially fertile ground in BAME communities into actual votes.

The race equality think tank Runnymede Trust ran focus groups which found that BAME citizens were quite ambivalent about Europe.

While there was a recognition that some of our rights came from EU institutions, which they wished to protect, BAME people were less likely to take advantage of free movement and, when they did, were more likely to encounter racial profiling at internal EU borders.

They felt less ‘solidarity’ or ‘shared identity’ with others in Europe and some viewed Europe in explicitly ethnic or racial terms, identifying ‘Fortress Europe’ as a way of keeping out non-white immigrants while allowing significant levels of European migration.

A recent British Future report highlighted the challenges for both ‘in’ and ‘out’ camps in appealing to multicultural Britain. One way not to do this is to put out undiverse leaflets in areas with a very high BAME population.

Aside from the obvious economic and social reasons for remaining in Europe, there is a need to spell out the rights and protections against discrimination which were made on the mainland.

Likewise, it is easy to debunk arguments that Britain’s future lies in the Commonwealth, a relic of the old Empire that is little more than a talking shop and networking club.

Boosting our trade with expanding economies in Africa, Asia and South America does not depend on leaving the EU, clearly.

Aligning issues which resonate more with ethnically-diverse communities alongside the standard pro-Europe arguments makes common sense and will help remain campaigns to feature more in places like The Voice.

The fact that a whole side of the EU debate is being outfoxed by a single UKIP member with no track record of working in BAME communities is embarrassing to watch.

It’s not like the ‘remain’ campaign weren’t alerted to the ethnic gap in their strategy before.

While Labour continue to digest the need to raise their game on racial diversity, having marginally slipped further back against the Tories on BAME votes at the last election, it is disappointing that a pro-EU campaign driven largely by progressives has not absorbed these lessons. There is still time.

Lester Holloway used to be editor of the New Nation, an African and Caribbean paper, and news editor at The Voice. He works for the Runnymede Trust but is writing in a personal capacity