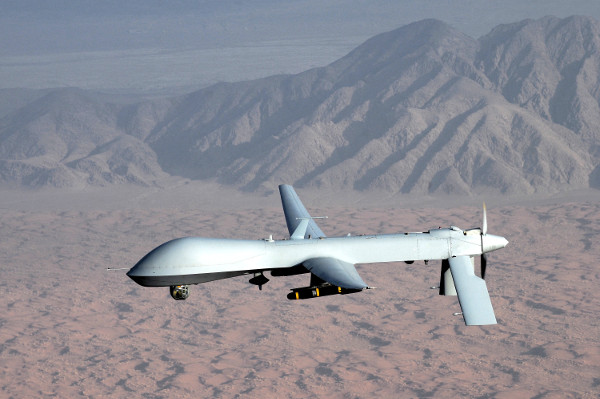 Since 2004, the US has conducted a total of 408 Unmanned Aerial Vehicle (UAV) strikes in Pakistan in order to combat the rise of extremist groups such as Al Qaeda, the Pakistani Taliban (TTP), and Islamic State (IS) in South Asia.

Admittedly, drones provide several battlefield advantages: they do not require a qualified pilot on board, they can stay in the air for over 30 hours at a time and they are a cost effective alternative to conventional manned aircraft.

However, the probity, legality, and efficacy of UAV deployment within this region raises several important concerns about the future of the US’s unmanned aerial offensive.

First, and although it may not be a popular line to toe amongst hard headed foreign policy analysts, the human costs of UAV warfare ought to be considered. UAVs are notoriously inaccurate, and according to the Bureau of investigative journalism up to 34 per cent (950) of those that have been killed since 2004 were civilians.

A further 1,700 have been injured, and many more live in constant fear that they will be the next victims of an attack.

Unsurprisingly, this has had damaging implications for the efficacy of the US’s counter-terrorism efforts. According to Pakistani cricketer-turned-politician Imran Khan, ‘drones will push people towards terrorism’, and the fear that is precipitated by UAVs develops virulent anti-Western grievances that are exploited by jihadi organisations that have declared their position against the West.

In light of Faisal Shahzad’s failed attempt to detonate a bomb in Times Square in May 2010 in response to US drone policy, it is clear that this is both a Pakistani and a Western problem.

To complicate matters further, the legality of the US’s aerial offensive is also highly questionable. Since 2004, only 4 per cent of all UAV strikes have resulted in Al Qaeda related casualties, whereas 76 per cent of deaths caused by drone attacks fall into a suspiciously termed legal grey area.

According to a Stanford/ NYU report entitled Living Under Drones, there is much debate over whether or not the US is in violation of both international human rights laws and Pakistani sovereignty.

Disagreement over the legal status of the US’s aerial activity has also damaged US-Pakistani relations to the detriment of a coordinated response to the insurgency. On numerous occasions, Pakistani prime minister Nawaz Sharif has argued that the US is operating in violation of Pakistan’s territorial integrity, and that they threaten to destabilise an already volatile balance of power within the region.

Although the Obama administration denies these claims, there is reason to believe that Sharif is correct in his analysis of the strategic implications of US drone policy.

Traditionally, it is thought that if the leadership of these terrorist organisations is decapitated they will be unable to form a coordinated fighting force and the security situation within the affected region will stabilise.

While this may have been true with the fight against Al Qaeda, IS was resilient to the UAV strikes that killed both their deputy emir and his replacement in Khorasan province early this year; these groups are becoming increasingly adept at adjusting to losses in their leadership.

This significantly undermines the operational logic of UAV warfare.

Furthermore, by hastening unanticipated changes in the leadership of these organisations, drone strikes have caused internal divisions within the TTP and other organisations that have led to the splintering off of IS affiliated groups to the disadvantage of regional stability.

Following the successful assassination of TTP Commander Hakimullah Mehsud in 2013, Jundullah, a terrorist organisation and TTP affiliate, was rejected by the TTP’s new leadership for having bombed a church in Peshawar.

Within months, Jundullah had pledged allegiance to IS, declaring, ‘they are our brothers, whatever plan they have we will support them’.

It is believed that IS’s South Asian faction, Islamic State in Khorasan Province (ISKP), was also born out of similar circumstances.

In this context those who are responsible for determining the direction of unmanned aerial warfare ought to think carefully about sacrificing human rights, international legal obligations and relationships, and to a certain extent, regional stability, in exchange for a short-term, and arguably outdated approach to a complex, ideological problem.

In their latest report, ‘South Asian Militant Groups and Global Jihad in 2015,’ Quilliam’s Malik and Beevor argue that military activity must be coupled with grassroots and civil society initiatives.

By popularising counter-narratives that undermine the jihadist worldview that these groups propagate, the governments involved will be able to tackle the causes of radicalisation before their implications are made manifest.

This will help to reduce the scale of these organisations, and, at the very least, stop them from growing at such a rapid pace.

In sum, both the US and the Pakistani governments must acknowledge the human as well as the ideological implications of drone strikes, and they should understand that their enemy is a uniquely resilient force that will not subside upon a fracturing of their leadership.

What is clear, however, is that the Pakistani government, and any other government looking to implement a successful counter-extremism policy, must focus on undermining the causes of radicalisation, as well as combating its implications.

David Rapp is a student at the Georgetown University Edmund A. Walsh School of Foreign Service, and a research intern at Quilliam.