British politics is mired in an inward-looking and parochial phase, but I believe Labour is better than that 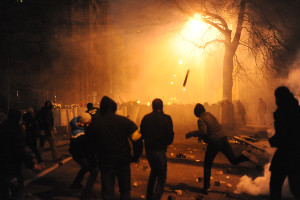 If I tell you I was at Euromaidan you’ll immediately get the wrong idea. On a freezing cold day of brilliant sunshine, I was keeping an appointment with an important Ukrainian for whom I have a soft spot; my wife. It was December 2013 – before the violence erupted – and despite the anger at recent events the atmosphere was convivial, you might even say comradely.

The demands at the centre of the protest were unremarkable, even humdrum. An end to the corruption that was (and still is) crippling the country and the introduction of what makes our lives in the EU prosperous and enviable – the rule of law; operating inside a framework of rules presided over by fair courts and transparent institutions.

You know the history – those simple ambitions had been dashed by Viktor Yanukovych after a late intervention by Vladimir Putin involving the offer of cash, the exertion of energy blackmail and the application of threats.

In front of the hastily erected stage the huddled crowd pogoed together for warmth to a chant of ‘Khto ne skache toy Moskal’ (Those not jumping are Russians), proud activists graffitied their home town in the maze of tunnels around the Metro stations – Rivne, Odessa, Mukachevo, Kharkiv – and enterprising vendors sold flags and scarves asserting Ukrainian pride and independence from Russian interference.

The Euromaidan I saw, and prefer to remember, was fond, hopeful and emboldened. I imagined it to be a second Orange Revolution and hopefully more successful. I’d be lying if I claimed to foresee what happened next.

What happened next – long after our departure – was closer to a cataclysm. The streets aflame, the same pogoing activists I’d stood alongside – now in ramshackle armour – scrambling for cover as their friends were picked off by snipers.

Back in London we worried for our family and friends, and worried still more when Russia’s ‘little green men’ invaded and annexed Crimea. I’d spent time in this beautiful, rugged, region and never detected in the taxi drivers and shopkeepers the ability or inclination to pick up Kalashnikovs and drive tanks through Sevastopol.

What did we think Putin would do when we acquiesced in this nonsense of ‘concerned citizens’ taking up arms? He did what any nationalist who considers the collapse of the Soviet Union ‘the greatest catastrophe of the 20th century’ would do: he made another land-grab by moving into eastern Ukraine. Francois Hollande may say there is no military solution to this conflict, but Vladimir Putin would like to disagree.

For someone with a real connection to Ukraine I arrived shamefully late to the conclusion that I had a responsibility to do something more than tut at the hot air of Western leaders and compose anti-Putin tweets. I launched Labour Friends of Ukraine last week with the modest ambition of bringing together sympathetic party members, providing news and notice of events and perhaps even attracting some support from our MPs and MEPs.

British politics is mired in an inward-looking and parochial phase but I believe that Labour is better than that. We believe in a better world, not just better gas and electricity bills.

With his old fashioned masculinity and faux-deference to conservative religion Putin is, almost to a comedic extent, the personification of a Sicilian mobster. In his creepy ethnocentrism and appeals to national destiny there are historical parallels that are nothing to laugh about. Labour has faced down such men in the past and expressed solidarity with their victims. It’s time to do so again.

23 Responses to “Why I launched Labour Friends of Ukraine”