The most recent ICM poll puts the NHS at the top of the agenda for concerned voters. 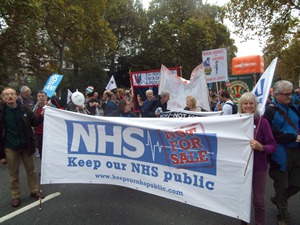 A week can be a long time in politics.

For the NHS, last week was a boost with people prepared to take action- both civil and industrial to say to the government our NHS is not for sale.

No one can claim that there is political apathy amongst the public over the NHS and where best interests of staff and patients lie.

The most recent ICM poll puts the NHS at the top of the agenda for concerned voters.

The Royal College of Midwives taking strike action for the first time in their 133 year history last Monday is a sign that people do not need to be encouraged to be angry. Rather they simply need organising.

Keep Our NHS Public will be playing a key role in organising this anger in coming months and next year leading up to the general election.

The Clive Efford Private Members Bill due for its second reading in Parliament on November 21 will be a key campaigning point for us as we seek cross parliamentary support for repeal of the Health and Social Care Act 2012.

The ‘NHS Reinstatement Bill‘, which sets out the legal steps needed not only to reverse the failings of the Health & Social Care Act 2012, but to fully restore the NHS in England as an accountable public service was co-authored by Professor Allyson Pollock.

Keep Our NHS Public will be campaigning for the inclusion of as many aspects of the Pollock bill into the final Clive Efford Bill.

Campaigning days on the bill and raising public awareness have been organised by the TUC and KONP will be organising its own days of action on the issue. With unity of purpose, ordinary people can change the course plotted by this Tory/Lib Dem coalition.

What was clear from the demonstration this weekend, is that not only do workers need a pay rise but they need and demand a health service free and at the point of use.

Members of the public openly applauded pro-NHS banners as the health section of the 90,000-strong demonstration headed toward Hyde Park.

With the smallest of margins at stake, NHS privatisation is the key issue to galvanise public resistance and to hold politicians to account.

John Millington is press and campaigns officer for Keep Our NHS Public. He writes in a personal capacity