Incomes in the West Midlands are significantly lower than in the poorest regions of Germany, France, Belgium, Austria, Denmark, Sweden and Finland.

Incomes in the West Midlands are significantly lower than in the poorest regions of Germany, France, Belgium, Austria, Denmark, Sweden and Finland.

On occasions when ‘the North South divide’ is raised as a political issue, such as George Osborne’s speech on rail connectivity in Manchester last week, this graph from the Office of National Statistics (ONS) is often cited to illustrate the difference in living standards across different parts of Britain. 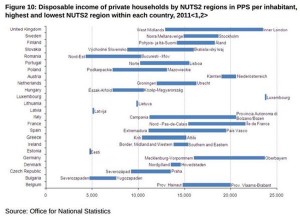 It shows the gap between incomes in the highest and lowest region of certain EU countries. The line is longest in the UK, meaning the income gap between inner-London and the West Midlands is bigger than the gap anywhere else in Europe.

It is instructive to note how the West Midlands compares with the poorest region in other countries. Obviously, incomes are far higher than the poorest part of recent EU accession countries like Romania and Bulgaria. They’re also quite a bit higher than the most deprived regions of the countries worst hit by the Eurozone crisis such as Italy, Spain and Greece.

But these are not the countries with which most people would compare the UK. We tend to think of ourselves as enjoying a broadly similar standard of living to North West European states like Germany and France. As such, it is surprising to see that incomes in the West Midlands are significantly lower than in the poorest regions of Germany, France, Belgium, Austria, Denmark, Sweden and Finland.

Different sources and indicators tell a similar story. A report by the High Pay Centre analysed the Organisation of Economic Co-operation and Development’s ‘Better Life Index’, which shows the average income for the richest and poorest fifth of the population in different advanced economies. 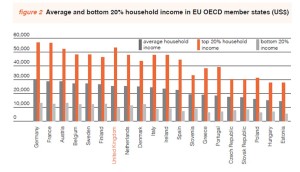 Figures from Eurostat published earlier this year showed that of the nine UK regions, just two – London and the South East – enjoy levels of GDP per head higher than the EU average.

Meanwhile figures from Eurostat show that large swathes of the UK including West Wales; Cornwall; Devon; Durham and the Tees Valley; South Yorkshire; Lincolnshire; Shropshire and Staffordshire; Merseyside; Lancashire; the Scottish Highlands; and Northern Ireland are all poorer than any similar-sized sub-region in North West Europe. Inner-London is, by some distance, the richest

These statistics tell a very different story to the narrative based on economic growth statistics of a booming Britain and an ailing Eurozone. How growth is distributed is equally important. They also provide some context to the debates around the work of economist Thomas Piketty, who some commentators argue has overstated the increase in inequality in the UK.

In comparison with other countries, the UK seems very unequal indeed – which means that poor people in this country are much poorer than those in similar-sized but more equal economies.

This arises from economic policy choices that we have made in the UK, leading to an economy based on disproportionately massive pay for a tiny few at the top, mainly in London and the South East, and insecure, low-wage work for those at the bottom.

With inequality now rising again and 80 per cent of new jobs created since 2010 being located London, this situation is likely to get worse not better.