Many older people won't be able to rely on traditional sources of informal care in the coming years, writes Jack Lofthouse. 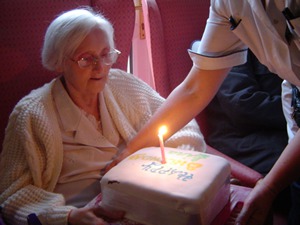 Many older people won’t be able to rely on traditional sources of informal care in the coming years and we need a plan to cope, writes Jack Lofthouse

Faced with a care system designed for the needs of a 1940s population, political energy has rightly been focused on how to integrate health and social care in order to unlock more funding for preventative action and improve conditions for care workers and service users alike.

Action is long overdue, and reform needs to be faster and more wide-reaching if it is to make a difference to the increasing numbers of people who rely upon the state for help.

However, most care for older people is not provided by the state or by private companies but by family members. This vitally important supply of care has been valued at over £55 billion annually. Unfortunately, however, we may not be able to rely upon this source of care indefinitely.

A new report, published today by IPPR, highlights the fact that thousands of us may not be able to rely upon family members to care for us in old age.

Analysis last year by Linda Pickard at LSE suggests that the number of older people with intense care needs will outstrip the supply of informal care from family members in 2017, with the consequent ‘care gap’ affecting as many as 230,000 people by 2030. 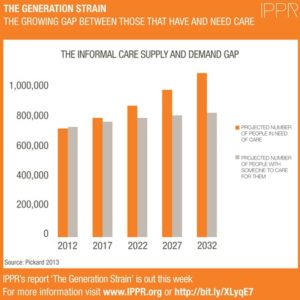 The main reason for this is simple demographics, based on the growing number of older people and the fact that fertility rates have dipped since the ‘babyboomer’ generation. Although the supply of care by spouses, partners and other family members is currently increasing, it is not sufficient to ensure everyone will get the support they need.

This growing gap in the supply and demand of informal care means policymakers also need to focus on the need to encourage and support friends, family and neighbours to care for each other. Fostering this kind of support needs a proactive approach from government, along with a commitment to investment in prevention and early intervention.

A great example of this in practice is in Leeds, which we visited as part of our Condition of Britain programme of work. Older people in the city region are supported by a network of community volunteers, most of to combat loneliness and isolation, and to encourage volunteering among older people. Each network acts as a gateway to advice, information and services, and promotes health and wellbeing, and thus improve the quality of life for the individual

Elsewhere, there are lessons to be learnt on the continent. Germany, for example, has made adapting to an ageing population a cornerstone of its political strategy and has invested heavily in support for older people and their carers, with an aim to unlocking volunteering capacity. One result of this has been the rise of Mehrgenerationenhauser (multi-generational houses), which bring together under one roof groups that had previously operated in isolation, such as childcare services, youth groups, support for young mums, day care for the elderly and advice centres.

This type of activity, obviously, will not substitute for formal care for people with disabilities. There is an ever-more urgent need to boost funding for social care services, as a prerequisite for improving support for older people, their families and for care workers, all of whom are being let down by a system that was not designed to cope with the demands of an ageing population.

And much more could be done to better support the millions of people who care for a loved one, particularly around strengthening employment rights to make it easier to balance work and care without significant financial penalty.

However, the fact remains that many older people will not be able to rely on traditional sources of informal care in the coming years, and we need to ensure that our plans account for this as best as possible.

Jack Lofthouse is a researcher at IPPR