Yesterday’s Budget did little to convince Unite and our members employed in manufacturing that the government has set a course to re-balance the UK economy. 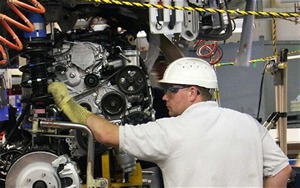 Yesterday’s Budget did little to convince Unite and our members employed in manufacturing that the government has set a course to re-balance the UK economy.

The government talked up manufacturing growth, but yesterday they again failed to take the necessary steps to build the solid foundations for a re-balancing of the economy to ensure we create a sustainable and strong manufacturing base.

The budget for ‘makers and doers’ did little to suggest a genuine resurgence of UK manufacturing is on the cards.

The ‘good news’ stories promoted by the government and media in the run up to the budget have masked an underlying problem – the government’s continuing reliance on the service sector, credit, personal debt and a housing boom to drive growth forward.

In his speech, George Osborne said that manufacturing had “halved” under Labour and was growing under the coalition. But he failed to amplify the statement – indeed it was pointed out that this passage in his speech does not appear in the version of the speech published on the government’s website.

As stated in my pre-budget blog, the small recovery in manufacturing is being lead by the automotive sector – which is good news – and to a certain extent by the aerospace sector.

Output in the ‘transport equipment’ sector grew by more than 50 per cent between 2009 and 2013, but all other manufacturing industries saw either a fall in output or only a small increase.

The chancellor announced little in the way of making this shift.

There were some crumbs of comfort – the business investment allowance will be doubled, which could help some manufacturers – but this does mean that the funds for investment will be forthcoming from the banks.

The extra tax credit for SMEs to invest in research and development has been costed at about the same level as the reduction in ‘Bingo tax’, and the funding for the Catapult Centres for cell therapy and the ‘wonder substance’ graphene is £25m, a fraction of what China is spending on graphene alone – and it was discovered here!

The heavy energy using sectors such as steel, oil, papermaking, ceramics and cement will welcome the announcements relating to energy prices and the capping of the carbon tax. But the government had no choice but to act, with energy prices crippling these labour intensive and foundation sectors.

This decision followed sustained and heavy lobbying by the industries and our unions including Unite. The TUC’s Phillip Pearson, in a blog yesterday, put it succinctly: “The government has yet to create the ambitious and well funded programme to support industrial energy efficiency and low carbon technologies such as carbon capture with incentives for investment.”

However the government continues to fail to tackle the deep underlying problems of youth unemployment facing manufacturers in attracting young people into worthwhile skilled apprenticeships. School students are left to their own devices, with little or nothing in the way of careers advice and skilled apprenticeships still belittled in favour of university.

Also, as the Financial Times pointed out, the chancellor’s big headache is low productivity – ‘a productivity crisis’. Output per hour worked traditionally grew annually by about 2 per cent, but there has been no expansion at all since 2007. Without productivity growth, living standards don’t rise except in the short-term  – and this was a short-term budget – as workers spend more than they are earning and use up their savings in doing so.

Below inflation pay deals, pay freezes, squeezes on public sector pay are contributing to this flatlining, and the lack of widespread collective bargaining means that many workers are solely beholden to the generosity (or lack of it) of their employer.

As the FT wisely points out: “Without productivity improvements, the OBR could not honestly predict the economy would keep expanding at its current pace for the next five years.”

This a point that Labour should be hitting home hard in the next few days in the debates on the budget.